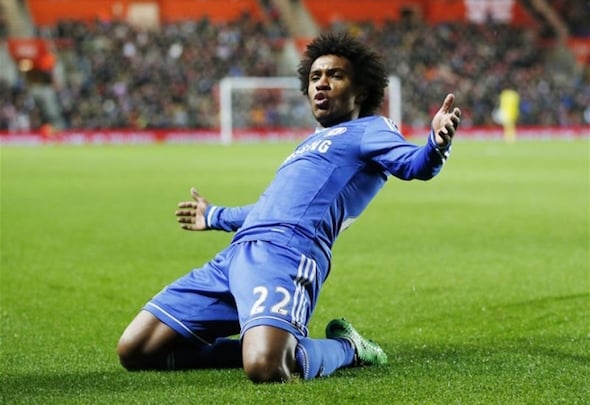 Manchester United are lining up a January bid for Chelsea attacking midfielder Willian, according to a report.

The Daily Star claim that United manager Jose Mourinho “is a huge fan of the 28-year-old” after his performances last season when the Portugese was at the Stamford Bridge helm.

It is said that Mourinho is “set to launch a January bid” for Willian, who is rated in the £40million bracket by Chelsea even though he has slipped down the pecking order since Antonio Conte switched to a 3-4-3 formation to transform the team’s results.

Willian has been on the sidelines during a run of six consecutive Premier League wins that have catapulted the Londoners to the top of the table.

The Brazil international has not started in the league for Chelsea since their 2-0 win at Hull on 1 October and was not even in the 18-man matchday squad for last weekend’s 1-0 triumph at Middlesbrough.

Willian joined Chelsea from Russian club Anzhi in the summer of 2013 and has established himself as a firm fans’ favourites with his performances in attacking midfield positions.

He has scored 21 goals and supplied 22 assists in 149 Chelsea matches and is renowned as one of the foremost dead-ball specialists in the Premier League.

Chelsea have showed in the past that they are not afraid to sell popular players to Manchester United for top dollar if they are deemed to not fit in with the manager’s plans. Juan Mata left for £37.1million in January 2014, although United struggled under David Moyes that season and it was a considerable fee for a player who was not a first-team regular. Willian has slipped down the pecking order at Stamford Bridge in the last two months but he will still have a big role to play this season. The Brazilian is not a regular scorer of goals from open play but his attitude, work rate and ability to play a number of positions to a high standard make him a key player in the squad. It is virtually impossible to see Chelsea cashing in during the January window – especially to a title rival – unless they have a blue-chip replacement lined up.

In other Chelsea news, Spurs have made a formal complaint about a senior Chelsea figure.