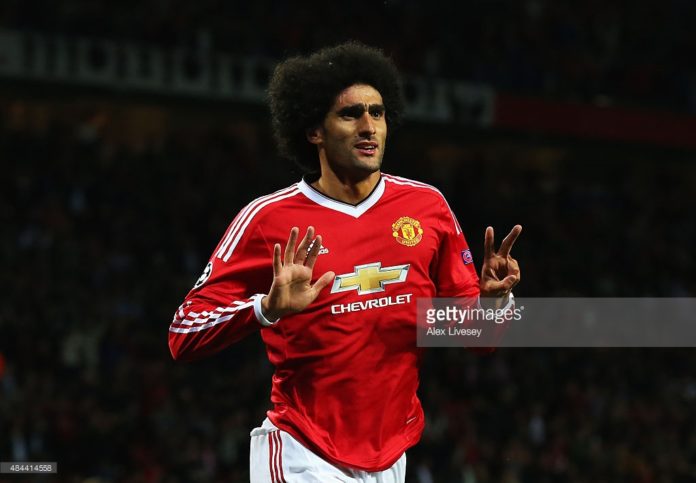 The Belgium international has been told to expect a recall after making just two substitute appearances in United’s first six matches of the season.
This comes amid suggestions that Wayne Rooney is doubtful for the 5.30pm clash at Old Trafford after he was not seen arriving with the rest of the squad at their base at Manchester’s Lowry Hotel on Friday afternoon.
Fellaini missed United’s first three Premier League matches of the season after serving a suspension for a red card he received in the team’s final game of 2014-15.
He was a substitute in the 2-1 defeat at Swansea before the international break but Louis van Gaal wants to make full use of the Belgians aerial power and hold-up play against Liverpool.
The manager recalls how Fellaini terrorised Brendan Rodgers’ defence in the first half of United’s 2-1 win at Anfield in March.
The versatile former Everton star won over the United fans last season with a series of crucial goals, and impressive performances, after a difficult first campaign following his £27million arrival from Goodison Park.
In other Manchester United news, Van Gaal is set to stick with most of the team who lost at Swansea 13 days ago. Juan Mata and Memphis Depay are expected to start on the flanks, with Morgan Schneiderlin and Bastian Schweinsteiger in front of the back four who have started all six of United’s game this season.