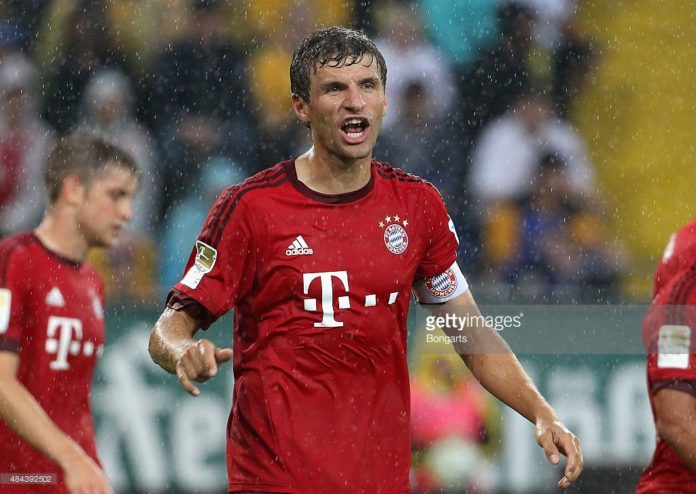 By Manchester correspondent Alex Stevens
Manchester United are poised to make an eleventh-hour swoop for Thomas Muller as they attempt to give Louis van Gaal the world-class forward he craves before the window closes, Football Insider sources understand.

United are prepared to pay Bayern Munich a fee of £60million as well as hand the Germany international a staggering £300,000-a-week contract.
Sources have told Football Insider that the Premier League giants remain hopeful of signing Muller before the window shuts next Tuesday.
The total package the Premier League big spenders are prepared to pay to land Muller is worth £138million over the course of the five-year contract they are ready to offer.
Football Insider understands United will make another strong push for the 25-year-old as well as stepping up plans to sign winger Sadio Mane from Southampton.
Manager Louis van Gaal wants two more signings in the final week of the window after being beaten by Chelsea to the signing of Pedro.
The money involved in United’s Muller bid demonstrates how far the club are willing to go to given Van Gaal a squad that can challenge for this season’s Premier League title as well as make an impact in the Champions League.
United’s top earners are currently skipper Wayne Rooney and Muller’s former team-mate Bastian Schweinsteiger, with both on a basic salary of £250,000-a-week.
But the Premier League club are ready to go even further to bring Muller from Munich and offer a similar package to the £293,000-a-week deal offered to Sergio Ramos before he decided to stay at Real Madrid.
Bayern have insisted that Muller is not for sale, with sporting director Matthias Sammer echoing the club’s stance this week. He said: “It is not Thomas who is causing the fuss, it is his performances. And we can’t do anything about that. [Chief executive] Karl-Heinz Rummenigge is right, he is a player that we cannot put a price on.”

The Bundesliga champions are aware of United’s interest but Van Gaal is ready to test their resolve to keep a player who scored two goals in the team’s opening-day 5-0 league win.
Muller is used in a variety of roles by Bayern manager Pep Guardiola, including all three of the attacking midfield positions behind the centre-forward as well as a deputising for Robert Lewandowski in the No9 role.