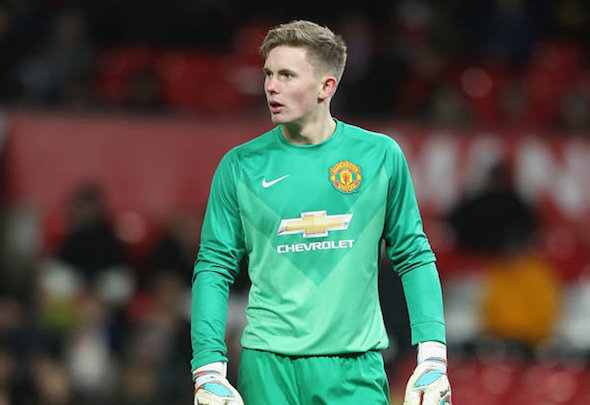 Rookie goalkeeper Dean Henderson has been recalled from a loan spell at Stockport as Manchester United hastily arrange cover ahead of Monday’s FA Cup clash at Shrewsbury Town.

United announced on Saturday afternoon that Henderson, 18, has returned to Old Trafford and is in line to go straight into the squad for the fifth-round tie at League One Shrewsbury.

Injuries to David de Gea and third-choice keeper Sam Johnstone, and the ineligibility of fourth-choice Joel Castro Pereira, have forced the Premier League club in action.

Sergio Romero is in line to continue in goal after impressing following his last-minute call-up to replace De Gea in United’s 2-1 defeat at Danish minnows Midtjylland on Thursday night.

De Gea underwent scans on Friday on the knee injury he sustained in the warm-up before the match in Denmark.

The Spanish goalkeeper is not expected to be sidelined for a lengthy period but he is rated doubtful for Monday’s clash at Shrewsbury.

With Johnstone also one of the 14 players on the casualty list, Pereira ineligible after already playing in the FA Cup this season while on loan Rochdale and Victor Valdes on loan at Standard Liege, United’s sixth-choice keeper could be on the bench at Shrewsbury.

Henderson, who turns 19 next month, initially joined the semi-professional National League North side in January for one month but that was extended for a further month before Saturday’s recall.

Henderson has made five appearances for Stockport and has demonstrated why he is so highly rated at the United academy.

Henderson joined United from Carlisle as a 14-year-old after they saw off competition from clubs including Chelsea and Newcastle.

He is yet to even make an appearance for the United Under-21s but is highly regarded by the club’s academy coaches and was shortlisted for the club’s Young Player of the Year award last season.

Academy goalkeeping coach Alan Fettis has claimed that the former England Under-17 ‘keeper has the potential “to become an excellent goalkeeper”.