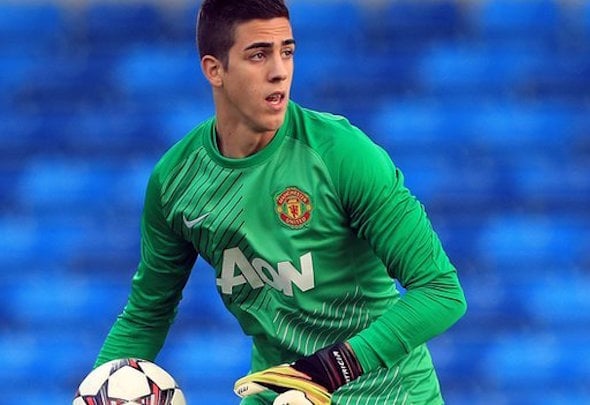 Joel Castro Pereira could be promoted from the Under-21s due to the injuries suffered by David de Gea and third-choice stopper Sam Johnstone.

De Gea underwent scans on Friday on the knee injury he sustained in the warm-up before United’s 2-1 defeat at Danish minnows Midtjylland on Thursday night.

The Spanish goalkeeper is not expected to be sidelined for a lengthy period but he is rated doubtful for Monday’s clash at League One strugglers Shrewsbury.

With Johnstone also one of the 14 players on the casualty list and unavailable for selection on Thursday night, a United source has told Football Insider that Louis van Gaal could promote 19-year-old Portugese Pereira from the youth team set-up.

Sergio Romero is in line to continue in goal after impressing following his last-minute call-up to replace De Gea in Denmark.

Castro has been United’s keeper in the Under-21s league since returning to Old Trafford in early January following a two-and-a-half-month loan spell at Rochdale.

He could be named on the substitute’s bench on Monday as he prepares to become the latest in a long time of Academy graduates to be called into the senior squad.