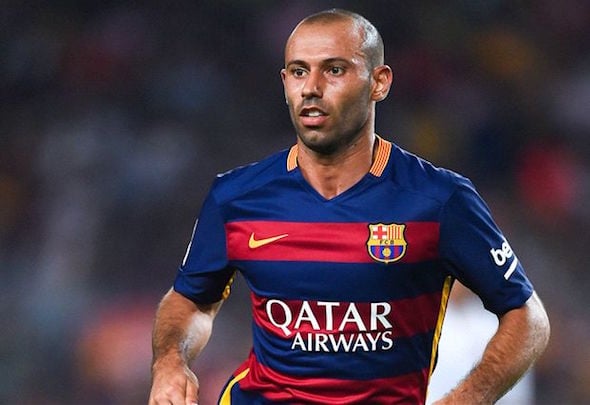 Javier Mascherano has identified the Arsenal players he most admires ahead of Tuesday’s Champions League showdown.

The Barcelona midfielder says he is a big fan of Alexis Sanchez and Mesut Ozil, as well as Santi Cazorla, Aaron Ramsey and Francis Coquelin.

Cazorla will miss the first leg of the last-16 tie at Emirates Stadium due to injury but the other four players are all likely to be Arsenal’s starting line-up.

Ozil and Ramsey were left out of Arsenal’s matchday squad for Saturday’s goal-less FA Cup draw against Hull, while Sanchez and Coquelin were on the substitute’s bench.

Mascherano played alongside Sanchez at Camp Nou for three seasons and sees some of Luis Suarez’s qualities in his fellow south American.

“Yes, totally,” Mascherano said in an interview with the Guardian. “Alexis is a fighter who never gives up a ball for lost. Regardless of how well he plays, he always gives everything. That’s fundamental: he plays a huge role for them (Arsenal), transcendental.

“His aggression and attitude is infectious. He transmits so much. And I think he did deliver here: he was very involved. Maybe he needed the challenge of a greater part elsewhere; you can understand that. But he gave us a lot.”

Barcelona beat Las Palmas 2-1 in La Liga on Saturday and are unbeaten in 31 matches going into Tuesday’s clash but Mascherano has total respect for their English opponents.

“Arsenal have always competed, consistently – even [back] when each year they lost important players and had to rebuild. In the last two seasons, they’ve raised their competitive level.

“Mesut Ozil’s vital: you notice more and more that everything revolves around him. And their midfield, when everyone’s fit, has lots of quality: Coquelin, Cazorla, Ramsey are players you have to be very aware of.

“They’ll be difficult: they want the ball and want to attack. They won’t change because it’s Barcelona. They’ll attack us and I think that deserves praise.”