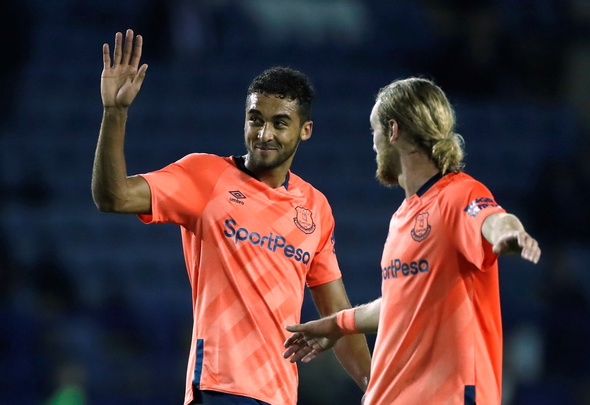 Darren Bent insists that Dominic Calvert-Lewin’s lack of Premier League goals is a “big problem” for the Everton striker as he says that the Toffees are in “disarray”.

Speaking exclusively to Football Insider assistant editor Russell Edge, the former Aston Villa and England hitman insists that the Toffees’ forward is a hard worker but says his inability to stick the ball in the back of the net on a consistent basis is a serious cause of concern.

The 22-year-old has scored just 12 goals in 83 Premier League appearances, one of those coming in his five top-flight outings this season.

Having been ahead of Tammy Abraham in the pecking order for England’s under-21s over the summer, the Chelsea striker currently the second-highest scorer in the Premier League, Bent insists that Calvert-Lewin needs to do more than be a hard worker up front.

Bent told Football Insider: “I don’t quite understand, he had a tough (Under-21) European Championships, didn’t quite go to plan. It’s such night and day between him and Tammy Abraham at the moment because he was ahead of Abraham in the Euros.

“Everton are in all sorts of disarray, they’re all over the place. (12 goals in 83 Premier League appearances) That there is a big problem, that is a massive stat. I like Calvert-Lewin, I think he’s a good player, works really hard, if you’re on his team, he’s one of those players you want but if you want someone to score you consistent Premier League goals, he’s not showing that.”

Calvert-Lewin was left on the bench for the Toffees’ last Premier League game but was handed a start by Marco Silva in the League Cup against Sheffield Wednesday on Tuesday night, netting both goals in a 2-0 win on what was his 100th appearance for the club.

He has netted at a rate of a goal every five games for Everton, 55 of his outings coming among the starting XI.

In other Everton news, Danny Mills has delivered his verdict on Marco Silva’s future as manager to Football Insider after the 2-0 defeat to Sheffield United.