Leigh Griffiths will be one of several Celtic players “frustrated” by Neil Lennon’s decision to start Ryan Christie up front against Ross County.

That is the view of former Rangers and Scotland manager Alex McLeish who, speaking exclusively to Football Insider, suggested the Northern Irish boss had seen enough from Albian Ajeti to know a change was needed up front.

The Swiss striker started four times in the Hoops’ five-game winning run across February but was dropped against County as attacking midfielder Christie stepped into a makeshift striker role alongside Odsonne Edouard. 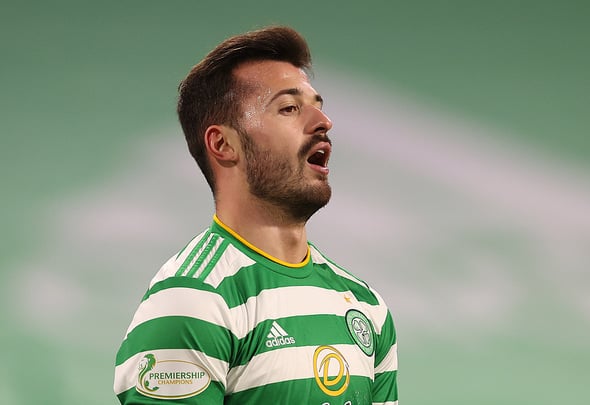 The attacking pair were guilty of passing up a number of goalscoring opportunities at Victoria Park and their profligacy came back to bite them as Jordan White sealed a surprise 1-0 win for the home side.

Christie’s inclusion in attack came despite Lennon having three recognised centre-forwards in the shape of Ajeti, Griffiths and Patryk Klimala on the bench.

McLeish suggested Lennon had seen enough of Ajeti in his recent performances but suggested there would still be some frustrated faces among the subs after Lennon’s call.

Asked if the thought the likes of Griffiths would be disappointed not to get the nod to replace Ajeti, McLeish told Football Insider assistant editor Russell Edge: “He needs to evaluate it and by that I mean is he performing, am I still getting a good game out of him?

“We won five in a row and he was part of that team, do I want to disrupt the rhythm of this team while he’s in there, there was something happening with him in the team.

“Neil does the analysis with these guys and he’s said: ‘No, it’s time for the change,’ then you know that there’ll be people on the bench frustrated and then the rotation process begins.”

Ajeti has scored six goals in his 27 appearances this season, while Klimala has three in three in 23 – the majority of which have come from the bench – and Griffiths six in 18.

In other news, Noel Whelan fears a serious Celtic player blow might be worse than first feared at Parkhead.