Alex McLeish has warned the “smashing” David Turnbull he faces extra attention from opposition managers after his latest Celtic heorics.

The former Rangers and Scotland manager, speaking exclusively to Football Insider, revealed the 21-year-old had been on his radar since being alerted to his talents by his former number two James McFadden.

Turnbull’s long-range effort, which was his sixth goal of the season, was enough to seal a 1-0 win against Aberdeen on Wednesday evening. 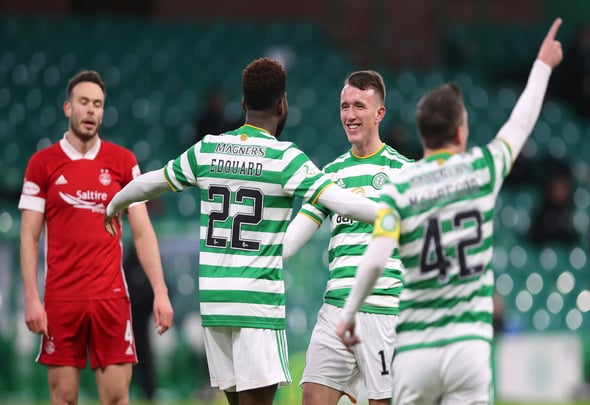 The summer signing struggled for regular game time early on in the campaign following his move from Motherwell but has established himself as a regular starter since the start of December.

McLeish admitted he was dazzled by the young midfielder’s ability at Parkhead and suggested he could come under extra attention from the opposition after another top performance.

McLeish told Football Insider assistant editor Russell Edge: “He is a boy I’ve always liked and James McFadden, when we were working together with Scotland, James McFadden was talking about him as an emerging, very good footballer.

“Now that he’s gone to Celtic he is even more in the scope and I must say, he’s got into the team as if he’s been there for his whole career. Credit to Motherwell for bringing him through as a smashing young player.

“His goal against Aberdeen was tremendous, what a strike – Aberdeen defenders maybe could have closed him down a wee bit more because that is one of the strengths of Turnbull, his distance at shooting.

“I think he’s only going to get better at that and I would expect managerial tactics to be thinking: ‘We need to close that guy down now, he’s scoring too many from deeper positions.'”

Turnbull has now scored 21 goals in 61 Premiership appearances, while he has a further 12 assists under his belt.

In other news, a Celtic star who came close to quitting is in line for new senior role at Parkhead.