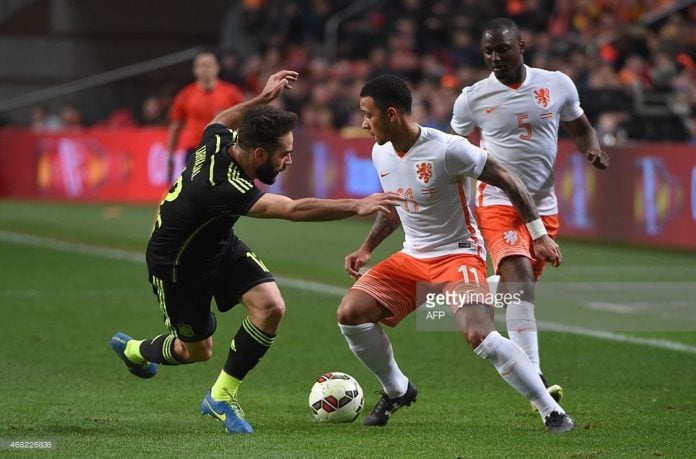 By Manchester correspondent Alex Stevens
Memphis Depay will fly to England later on Thursday to complete his move from PSV Eindhoven to Manchester United.

United announced on their Twitter feed on Thursday morning they have agreed a deal to sign the Dutch winger subject to him passing a medical.
Football Insider understands the fee is an initial £18.6million rising to a possible £23m depending on performance-related bonuses.
Depay, 21, is expected to tie up the formalities of a four-year contract with a 12-month option when he flies into Manchester later on Thursday.
United have confirmed the deal will be formalised when the transfer window opens next month.
Football Insider had revealed on April 12 that United were preparing a bid for Depay that would match PSV’s asking price and were confident of beating off interest in the Holland international from Liverpool, Tottenham and Paris Saint-Germain.
United said via the club’s official Twitter page: “Manchester United has reached an agreement with PSV Eindhoven & Memphis Depay for the player’s transfer, subject to a medical. Pending the successful completion of the medical, the deal will go through once the transfer window opens in June.”
PSV manager Philip Cocu announced the move to his squad on Thursday morning.
Sporting director Marcel Brands told PSV’s official website: “We are very proud of this upcoming transfer. Memphis has gone through all the teams of the PSV youth academy and has played an important part in us winning the league title this season.
“He’s a wonderful product of our club. He’ll make a good transition to a magnificent club in a beautiful competition. We obviously lose fantastic player, who is of great value to the team but we are very happy to grant him this move.”