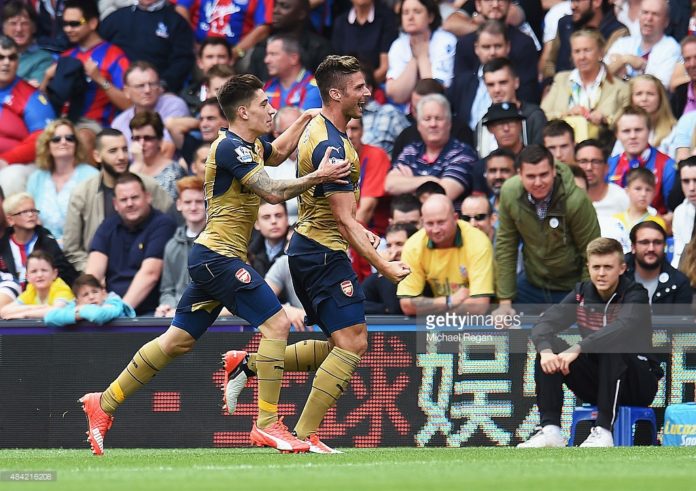 By London correspondent Tony Hughes
Mesut Ozil has the calibre to drive Arsenal to their first league triumph in 12 years and other things we learned from the Gunners’ Premier League win at Crystal Palace.

Ozil has eyes in the back of his head
If Arsenal are to end their 12-year title drought, you sense they will need an outstanding season from their playmaker-in-chief. Ozil has had a rocky couple of years since his club-record transfer from Real Madrid but there were signs in the final months of last season that he had finally become attuned to the unique demands of the Premier League. This was one of those days when the No10 delivered a nine-out-of-ten performance. His touch, awareness and ability to time as well as execute a pass were immaculate, and he was at the heart of the team’s intricate passing patterns. At times, it appeared that he has eyes in the back of his head. Ozil assisted Olivier Giroud’s excellent opener and created five goalscoring chances in total. This bodes well for the months ahead.

Sanchez will be even more effective when he is fit
What an asset the Chilean is. Even when far from fully fit, as he was in this, his first start since the Copa America final, Sanchez is a supremely dangerous opponent. His role in the winner, when he used the momentum of his far-post run to leap way above right-back Joel Ward and power in a header that could only be diverted by Damian Delaney into his own goal, demonstrated his courage, desire and technique. “He brings the drive forward, he brings the pressure on the opponent and can score goals,” noted Wenger afterwards. Sanchez was subbed in the second half as he grew understandably weary. Opponents will be aware how more effective he will be when he is fully fit.

Crystal Palace have their finest squad in years
A narrow defeat to a fine Arsenal team does not diminish the impression of the Premier League’s opening two weekends that this is the finest Palace squad in years. Just look at the bench at Alan Pardew’s disposal today. Among their number were Mile Jedinak, Karl Murray, Jordan Mutch and 2014-15 Championship player of the year Patrick Bamford, who is on loan from Chelsea. Pardew’s attack-minded team was full of pace and purpose, causing plenty of nervous moments for the visitors’ defence. They easily have enough quality to not get drawn into a relegation battle this season.
Cazorla is more effective in the centre
Santi Cazorla’s immaculate display in central midfield made a nonsense of Wenger’s brief flirtation with the Francis Coquelin-Aaron Ramsey partnership. To the manager’s credit, he only stuck with it for two matches if we are to include the Community Shield win over Chelsea. But Wenger had seen enough in the shock West Ham defeat to recognise his error and shifted Cazorla back inside with Ramsey pushed out to the right flank, a position which he has made it clear that he does not find entirely comfortable. The Welshman produced an energetic display but it was Cazorla who set the tempo for this win as his central role allowed him to get on the ball more often.

Joel Ward is the most under-rated full-back in England
Despite the wonder goal, this was not the 25-year-old’s finest game. Far from it. His failure to spot Sanchez’s run for the winner will wipe out the joy of the fantastic driven equaliser that gave Palace hope of picking up at least a point from a fixture that has rarely provided them with much success. But if anyone in Alan Pardew’s team deserves a bit of slack it is Joel Ward. He was a beacon of consistency last season, can play with equal facility at right-back or left-back, and is surely not far from an England call-up. Little wonder Palace tied the 25-year-old down to a new contract at the end of the season.