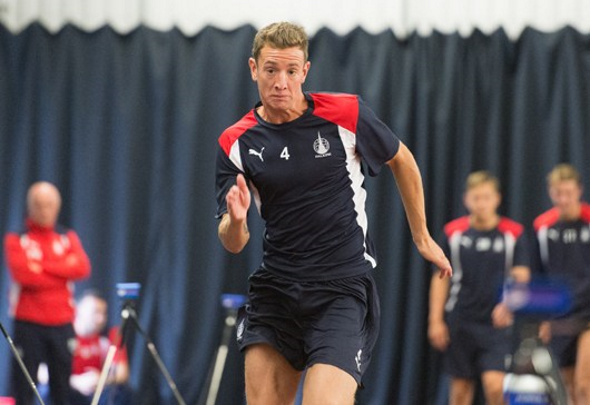 Falkirk captain Aaron Muirhead has claimed he didn’t punch Rangers defender David Bates during the Gers’ 4-1 Scottish Cup win on Sunday and said it was just a “moment of silliness.”

The Gers star was left writhing in pain on the ground after the off-the-ball flashpoint that referee Craig Thompson felt only merited a yellow card.

Muirhead was adamant he was never going to be sent-off following the incident, which came in the build up to Falkirk’s equaliser, but admitted Rangers scoring their second goal less than 30 seconds after the Bairns drew level was “soul destroying.”

“I wasn’t worried I was going to get sent off. I tried to just flick the boy to get away and it was a moment of silliness but the referee saw it and told me just to be careful. There was no danger of me being sent off as it was nothing serious,” Muirhead said as quoted by the Daily Record.

“I am not used to scoring goals and it’s just bounced off me and gone in to make it 1-1.

“At the time I thought it was a lifeline and it had got us back in the game. But to give a goal away so soon after we equalised was soul destroying.”

Rangers striker Jason Cummings scored a hat-trick in the 4-1 win before Muirhead put through his own goal and send the Gers through to the semi-finals.

Graeme Murty’s side will now face Old Firm rivals Celtic in the Hampden semi-finals in April.

Muirhead’s defence of himself is pretty weak after being caught on camera. The Falkirk defender also had a flashpoint with Alfredo Morelos not long before he was booked and looked like he was deliberately trying to antagonise certain Rangers players. The defender was incredibly lucky not to be sent off and even luckier that the Scottish FA’s compliance officer now can’t take any further action since the referee has dealt with it. Bates has now been the victim of two off-the-ball incidents in two games with the referee inexplicably only dishing out a booking each time.