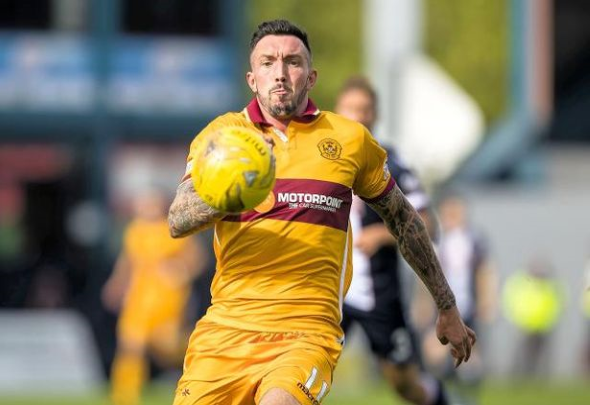 Motherwell striker Ryan Bowman has tried to lay the blame over him picking up more yellow cards on Rangers after the Gers complained that the Well star left Fabio Cardoso needing facial surgery.

Cardoso came off second-best to Bowman’s elbow twice when the Gers lost to Motherwell in the Scottish League Cup semi-final at Hampden earlier in the season, leaving the Portuguese defender sidelined and forced to undergo surgery to repair his nose in a controversial incident.

Bowman claims referees are now singling him out for special treatment as a result of Rangers’ complaints over one of their stars needing surgery after receiving a heavy blow from the striker.

“My  bookings have gone up ever since that day,” Bowman said, as quoted by the Daily Record.

“I’ve had four or five yellows since the semi-final and I think that’s because referees are looking out for me more than they were before those comments came out in the press.

“In the first game after the semi against Dundee I noticed it a lot. Every time I went up the players were on the floor.

“Whether the manager has told them to do that I don’t know. But it’s part and parcel of the game, the dark arts of football.”

The Gers were furious after the game that Bowman only picked up a yellow card despite leaving Cardoso bloodied.

Bowman has picked up two yellow cards since the Gers faced Motherwell at Hampden in October.

Bowman was lucky not to be sent-off against Rangers at Hampden and he’s been booked twice since – both times for justified fouls. The Motherwell striker’s complaints don’t really make any sense. Cardoso has been unable to force his way back into the side at Ibrox since being sidelined by Bowman – for better or worse – but in terms of referees looking out more for the striker and his flying elbows, it is probably a good thing for defenders. If officials are looking out for the kind of leap that leaves a player needing surgery to repair his face, then it may well be a matter of time before the Well’s man sees red.