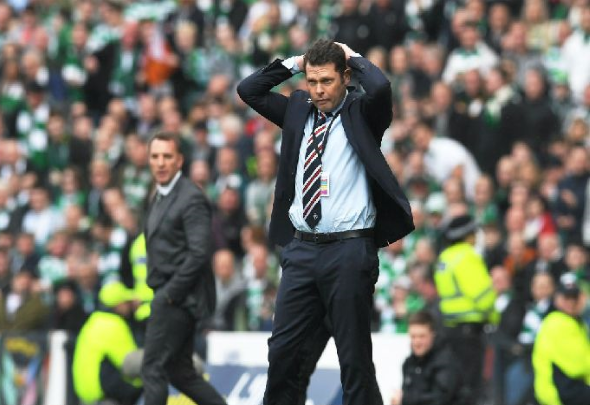 Rangers manager Graeme Murty has revealed he hasn’t sat down with midfielder Andy Halliday yet after the midfielder’s reaction to being substituted before half-time in last weekend’s 4-0 Scottish Cup thrashing by Celtic.

Halliday was pulled off five minutes before the break, launching into a foul-mouthed rant and had to be calmed down by his team-mates.

The Gers boss admitted he was giving Halliday “a bit of space” but insisted he would speak with him within 24 hours, before Sunday’s Scottish Premiership clash with Hearts.

“I am giving Andy a bit of space at the moment,” Murty said, as quoted by the Daily Mail.

“He looks a little bit raw. As a human being I respect his space. But, before Sunday, Andy and I will have a sit down and have a chat.”

The midfielder’s Rangers career was salvaged by Murty after he recalled him from loan in Azerbaijan in January.

Despite not being a regular part of the starting XI, Murty views Halliday as an important part of his squad although the 26-year-old’s reaction to being substituted was ridiculous.

It’s unlikely that Halliday will still be in the starting XI when the Gers line up against Hearts at Ibrox on Sunday.

It seems odd that the pair have still to speak and gives the impression that Murty is either unwilling or unprepared to speak with the 26-year-old. Halliday’s substitution was entirely justified and the midfielder’s performance at Hampden was nothing short of embarrassing. The 26-year-old might still be a bit ‘raw’ but that comes with the territory of playing for Rangers as a lifelong fan of the club. Halliday will do well to come back from having the Celtic end of Hampden singing his name though and the end is likely near for his Ibrox career.