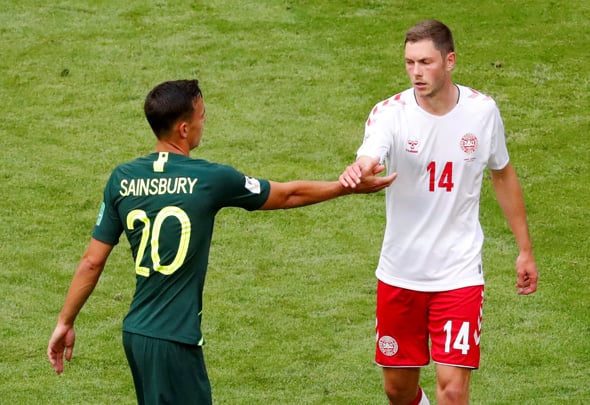 Aston Villa fans have shown that despite the club’s financial turmoil they have not lost their sense of humour following the news which Football Insider broke, that the Birmingham club have made an approach for Trent Sainsbury.

On the back of John Terry’s exit from the club after their failure to make it back into the Premier League, the Villans are in need of acquisitions at the heart of their defence and at a low value.

The 26-year-old Australian certainly would represent good value for money judging by his performance for his national side as the Socceroos fell to defeat against France in the opening game of the World Cup finals.

Despite the loss, the Grasshopper defender did not look an inch out of place amongst the likes of Kylian Mbappe Antoine Griezmann and Olivier Giroud, which was one of the reasons supporters were not completely against a move for the out of contract defender.

Sainsbury will be available on a free transfer this summer and this will likely be the direction the club will have to take in the window as cash flow concerns mean there won’t be a whole lot of money leaving Tony’s Xia’s back pocket.

Here is a selection of some of the best responses on social media from Villa supporters in reaction  to a potential transfer of Sainsbury:

It really is exciting times isn't it.

Dr X has obviously been told that he might be able to buy one and get one free .

After that france match i really wished that we get him. I for one will be very happy if he joins.. ticks all the boxes that we want for a CB. Experienced. On less wages. And may be just on loan.

We can’t afford Sainsbury’s we will be in Aldi

Do we get Nectar points?

On loan at Inter and Grasshoppers the last two seasons. Decent addition if it comes off 👍