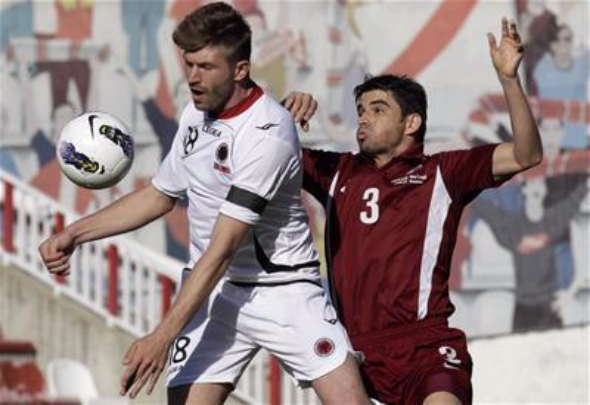 Neil Redfearn has revealed that he thought Edgar Cani was “miles away” from being up to the standard of playing for Leeds while he was manager.

The Albania international forward moved to the Yorkshire giants on a loan deal from Italian side Catania during the 2015 winter window until the end of the season.

Cani, 27, made four substitute appearances for the club during his loan spell under Redfearn, but remained goalless.

The former Whites boss explained how the striker was recommended to him by Nicola Salerno, who was head of recruitment at the club, with Redfearn only watching some footage of the attacker.

“I remember Nicola coming in one day and saying: ‘We’ve got this Albanian centre-forward, Edgar Cani – he’s brilliant’,” told Redfearn to November’s edition of FourFourTwo on page 81.

“So I looked at some footage of him using one of our scouting tools. The lad looked raw and the level he was playing at wasn’t good, to put it politely. After one of the goals you could hear a lone bloke clapping – he was just about the only person in the ground.

“Cani came in for training and I just thought ‘You’re miles away.’ He was a nice kid and he worked hard, but he was nowhere near.”

Redfearn took charge of the Yorkshire giants in October 2014 after Darko Milanic was sacked.

During his time in charge the club signed Cani, Sol Bamba and Granddi Ngoyi, with Bamba the only one who had an impact in the team.

Redfearn spent just 33 matches in charge of the Yorkshire giants and after finishing in 15th place he became the third boss to be relieved of his job at the club during the campaign.

In other Leeds news, Steve Evans has warned Garry Monk that pressure could start to build upon him around January or February if his side fall out of the race for promotion.