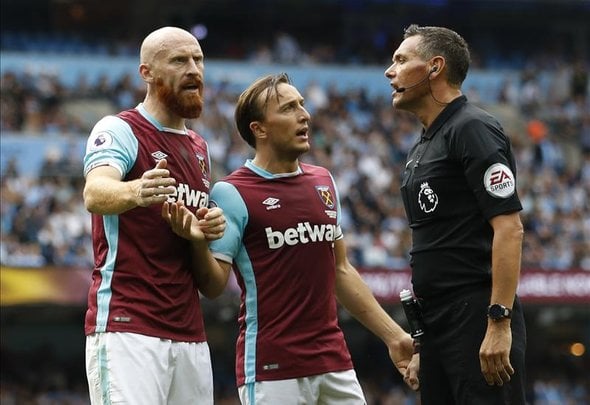 West Ham defender James Collins has been withdrawn from the Wales squad on Tuesday morning.

The Hammers face London rivals Tottenham in the Premier League after the international break and could now be without the 33-year-old, but Mauricio Pochettino’s side have also suffered an injury scare.

The Sun claim Spurs and England defender Danny Rose is a doubt for his nation’s upcoming matches, with West Ham’s left-back Aaron Cresswell called into the squad for the first time as a precaution.

Manager Slaven Bilic will be hoping Collins has not suffered a serious injury, with one player already ruled out of the Spurs clash.

West Ham captain Mark Noble will miss the club’s next match through suspension after he picked up his fifth booking against Stoke on Saturday.

Wales’ FA announced that Collins had been withdrawn from the squad, but did not reveal the reasons behind the decision.

“Squad update: James Collins had been withdrawn from the Wales squad and is replaced by Joe Walsh from MK Dons,” the Welsh FA wrote on their official Twitter account.

Squad Update: James Collins has been withdrawn from the Wales squad and is replaced by Joe Walsh from @MKDonsFC #WALSRB #TogetherStronger pic.twitter.com/lrEh5DLOIP

Collins has made nine appearances in all competitions this season and played 90 minutes in the last match against Stoke, with Winston Reid missing through suspension.

The centre-back will miss the World Cup qualifier at home against Serbia on Saturday, but has already made an impressive 50 appearances for Wales.

He joined the Hammers in 2012 from Aston Villa and is competing with Reid, Angelo Ogbonna and Cheikhou Kouyate for a starting position this season.

In other West Ham team news, the club’s supporters reacted on Twitter as a key midfielder is ruled out against Spurs.