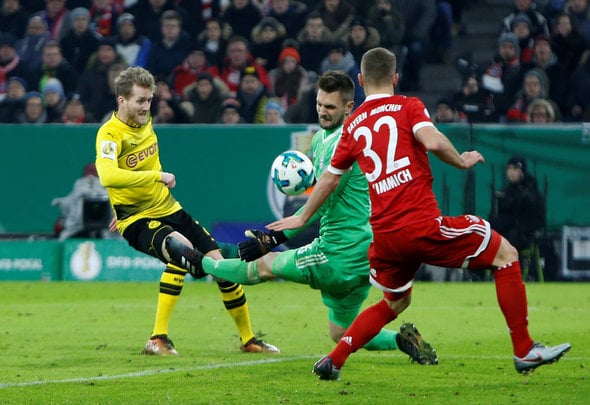 Newcastle United have been installed clear favourites to sign Borussia Dortmund forward Andre Schurrle, according to the latest bookmakers’ odds.
SkyBet have priced the Magpies at 5/2 to snap up Schurrle, 27, before the end of the month after the Daily Mail reported that Dortmund have made the Germany international available to go out on loan.
It is understood that the European giants are prepared to pay half of his £150,000-a-week wage packet in order to let him leave Signal Iduna Park on an 18-month temporary deal.

Southampton (20/1) are next in the running to sign Schurrle after he was said to be available to move on loan, but it seems that Newcastle are clearly in pole position to snap up the ex-Chelsea forward, most likely on loan.
The Mail reported that Stoke and Newcastle are now considering a move for the Germany World Cup winner, who set up Mario Gotze to score the winning goal against Argentina in the Brazil 2014 final.
He has slipped well down the pecking order at Dortmund this season though, making just 10 appearances in all competitions due to injury.
The wide-forward, who can play on the wing or as a striker, has also previously had spells at Chelsea, Bayer Leverkusen, Mainz and Wolfsburg.
He would no doubt be a brilliant addition for Newcastle, who could try to take advantage of signing Schurrle for this season and next.
In other Newcastle United news, Mike Ashley has sanctioned the Magpies to swoop for this £7million left-back from a top six club.
We’ve launched a << BREAKING NEWS FEED>> exclusively for your club. ‘Like Us’ on Facebook by clicking here if you want 24/7 updates on all Newcastle United breaking news.