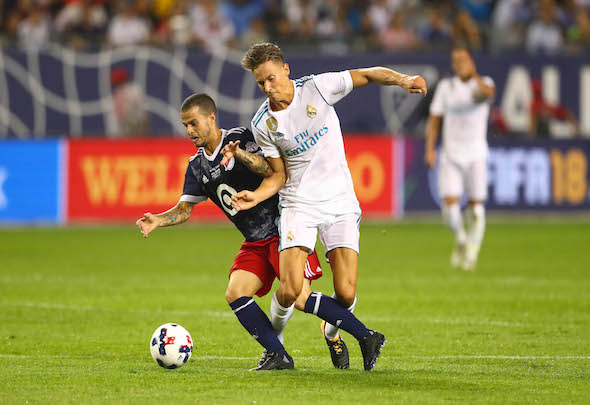 Newcastle United along with Deportivo La Coruna are leading the way in the battle for the signature of Real Madrid defensive midfielder Marcos Llorente, according to a report.
AS, the Spanish media outlet, has revealed that the Magpies are chasing the Los Blancos fringe player, who has made just 13 outings for Zinedine Zidane’s side this season.
However, the midfielder is not thought to be keen on a move during the January window.
Llorente, 23, was believed to be a target for Premier League rivals Arsenal in the summer although no move came to fruition.
The same report also details that the player is also being eyed up by Alaves where he spent last season on loan.
Football Insider verdict:
Should this move materialise, unless it follows the announcement of a striker, supporters of the Magpies will not be impressed. Throughout the window, the club have been urged to address their goalscoring issues with Joselu and Perez the club’s top scorers bagging just four goals apiece. The side is in dire need of reinforcements going forward, so much so that the north-east club have been left lingering precariously just above the bottom three in the Premier League. If the Magpies can get Llorente and add a forward or two, it will appease the St James’s Park faithful and stave off relegation – for this season at least.
In other Newcastle United transfer news, manager confirms door is still open for last-minute departure.