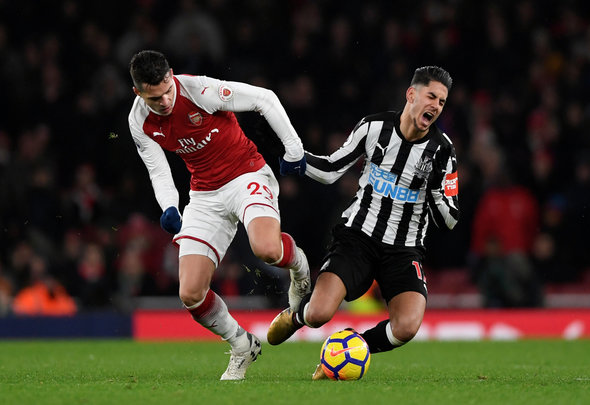 Newcastle United fans have slammed Ayoze Perez on Twitter after being less than impressive with his performance in the 2-2 draw at Bournemouth on Saturday.
Perez, 24, misplaced a number of passes and squandered multiple chances in front of goal, leaving those who watched the Spanish attacker furious as the team let slip of a two goal lead.
Dwight Gayle scored two first-half goals to give Rafa Benitez’s side a 2-0 advantage at the break.
Adam Smith grabbed a goal back for Bournemouth in the 80th minute before Dan Gosling netted with one minute of normal time to be played.
The Toon Army were left furious with Perez on Twitter after seeing their players bottle what appeared to be a solid lead.
One angry Newcastle fan claimed that the attacking midfielder was an “absolute liability”.
Here is a selection of their tweets:

Perez man ffs #nufc should be able too put them chances away!

Imagine if we had a decent attacking midfielder. Perez lacks any sort of quality #NUFC

Perez, He is playing only because he is Spanish … #NUFC

Perez! Waste of a shirt

#nufc please remove Perez, for someone a bit of with pace ..these are there to be caught on the break

Been a huge critic of Perez all season. Still will be as I think he is lost at this level. But thats a great ball back across goal so credit where its due. Also Gayle with 2??? Slimani who?!?!? #nufc

Like I just said, Ayoze Perez is an absolute liability. Great showing from the rest of the side though.#NUFC ⚪️⚫️⚪️⚫️

Perez has made 26 appearances in all competitions for Newcastle this season, scoring four goals and supplying two assists.
The Spaniard has been widely criticised all season and it seems that his missed against Bournemouth this weekend may have just costed Benitez and his men of three points.
Next up for the Magpies is a tough trip to Anfield to play Jurgen Klopp’s Liverpool.
The Reds hammered West Ham 4-1 on Saturday with Roberto Firmino, Mohamed Salah and Sadio Mane all netting.
In other Newcastle United news, Everton are in the hunt to sign this £35,000-a-week Magpies player.
Don’t miss out on breaking and exclusive Newcastle United news by clicking here for our brilliant 24/7 updates on Facebook, Instagram and YouTube.