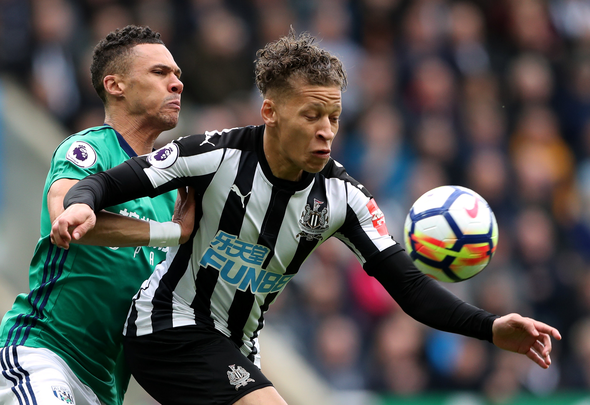 Newcastle United fans have slammed Dwight Gayle for his performance in the 1-0 defeat to West Brom at St James’ Park on Saturday.

Gayle, 27, has scored in just one of his last 19 Premier League appearances, however Rafa Benitez still decided to keep the faith in the former Crystal Palace man.

The centre-forward almost got on the scoresheet just before half-time when his header was amazingly saved by Baggies shot-stopper Ben Foster.

Newcastle fans were less than happy with the striker’s performance and took to Twitter to tear into him.

One angry member of the Toon Army claimed that the club should look to “sell” the club’s top goalscorer from their Championship-winning campaign last season.

Dwight Gayle had such a bad half and just missed a sitter wtf man. Definitely the most disappointing player of the season for #NUFC . Not the worst but digressed by so much.

if nothing else this season has finally proved why Dwight Gayle should never start games in the premier league.

Gayle has made 35 appearances in all competitions for Newcastle this season and has scored just five goals.

The Magpies have not won a single game in which the former Peterborough striker has found the net and it looks like the fans’ calls for him to be sold in the summer are more than deserved.

Gayle has been linked with leaving Newcastle over the past few months, with Guardian’s deputy sports news editor Ed Aarons claiming on his personal Twitter account in January that Fulham were looking to snap him up before they eventually got Aleksandar Mitrovic.

In other Newcastle United news, Magpies fans have been drooling over this Sunderland player and have urged the club to sign him in the summer.