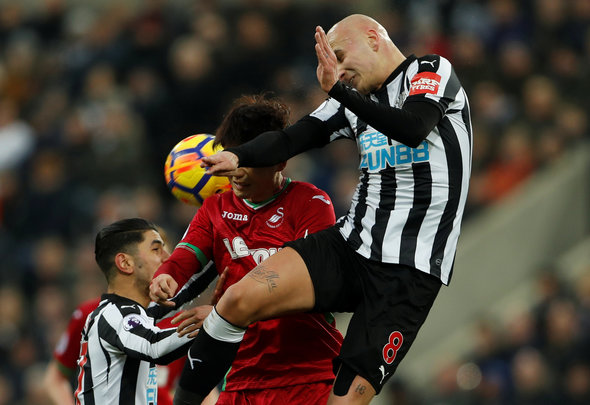 Newcastle United fans have taken to Twitter to slam Jonjo Shelvey for his performance in the 1-1 draw with Swansea at St James’ Park on Saturday afternoon.
Shelvey, 25, was named to start in the centre of midfield alongside Mo Diame against the Swans, but the six-times England international failed to impress the Toon Army, especially with his set-pieces and attitude.
He was taken off in the 82nd minute to be replaced by Mikel Merino, and did not seem happy with Rafa Benitez when he refused to shake his hand.
Newcastle had to come from behind against the Welsh club when Jordan Ayew opened the scoring on the hour mark.
However eight minutes later, substitute Joselu got the Magpies back in the game.
Fans would no doubt have been happy to have rescued themselves from a defeat, but they were far from pleased with Shelvey, with one supporter saying that the club should “sell” the senior player in the transfer window.
Here is a selection of their tweets:

Shelvey has been poor. Merino would very likely improve this team #nufc

Awful there from Shelvey. #nufc

How much are West Ham offering for Shelvey… 😂 🚖 #NUFC

Shelvey out, you DO NOT DISRESPECT RAFA. #NUFC

Shelvey can do one for me. Don't need his attitude during the hard times

Shelvey has made 19 appearances across all competitions for Newcastle this season, scoring one goals in the process.
The former Swansea midfielder has picked up more red cards than goals this term though, having been handed his marching orders against Tottenham and Everton.
In other Newcastle United news, this attacker wanted by the Magpies is edging closer to a switch to the Premier League.
We’ve launched a << BREAKING NEWS FEED>> exclusively for your club. ‘Like Us’ on Facebook by clicking here if you want 24/7 updates on all Newcastle United breaking news.