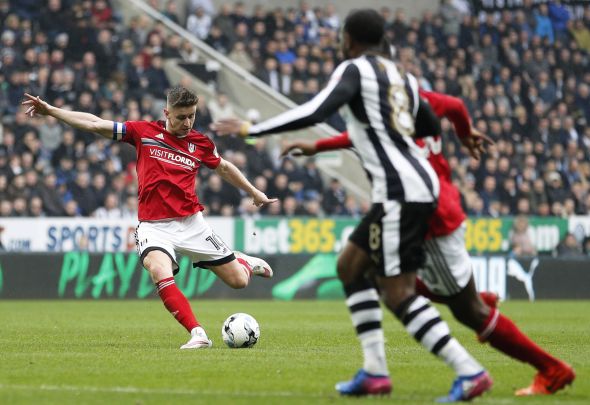 Newcastle United are set to launch a fresh bid to sign playmaker Tom Cairney after Fulham’s play-offs heartache, according to a report.

The Chronicle claim the north-east giants are ready to revive their interest in the 26-year-old following the London club’s semi-final defeat to Reading on Tuesday night.

It is said that Newcastle were quoted a £20million fee for Cairney during the January transfer window but Fulham are likely to now accepted a lower bid.

The Chronicle report that the Scotland international is “interested” in a transfer to Newcastle and he also has family ties to the club as his grandfather was an avid Magpies supporter.

Cairney has a contract with Fulham that runs until 2019 with an option for a further 12 months.

But he is entering his peak years and could view a transfer to Newcastle as an excellent career move, especially given that manager Rafael Benitez is a big admirer of him.

Benitez is stepping up preparation for the north-east club’s return to the Premier League after they stormed to the Championship title this year.

Left-footed Cairney has been one of the outstanding players in the Championship this season.

The attacking midfielder made 51 Fulham appearances in total, scoring 13 goals and supplying a further 12 assists.

In other Newcastle United transfer news, the club have sealed a sensational record-breaking deal worth £24million.