Arsenal’s pursuit of Nigerian starlet Samuel Chukwueze has ended in failure, with the youngster opting to join Portuguese giants Porto instead.

This spectacular U-turn comes despite the Gunners doing almost everything but putting pen to paper, with manager Arsene Wenger meeting Diamond Academy’s Chukwueze, and the Flying Eagles prodigy even passing a medical at Arsenal.

The Daily Star reported that Martin Apugo, Diamond Academy’s President, said to reliable Nigerian football outlet AllNigerianSoccer.com, that the Nigerian under-17 international is heading to Porto despite Arsenal’s interest.

It is said a fee of £2.5million had been agreed with Arsenal, with £1.5 million of that being paid up-front and two instalments of £500,000 to be paid, the first when he broke into the first-team and the second when he had earned an international cap.

Chukwueze was even pictured with Wenger, along with teammate Kelechi Nwakali and Nigerian legend Kanu ahead of signing a contract. But it appears that has now fallen through.

Exclusive first pics of Nwakali and Chukwueze with @papilokanu and Arsenal Wenger at @Arse… https://t.co/SsH5V9ZqGv pic.twitter.com/68Sux8Tqci

“Chukwueze is going to FC Porto not Monaco.” Apugo said to All Nigerian Soccer. “Arsenal wanted Chukwueze, but the problem is that they could not agree with Diamond Academy.”

All is not lost for Arsenal though, with Nwakali signing a five-year contract for a fee of £3 million. The Nigerian, who also played for Diamond Academy, is the Nigerian under-17’s captain and was the ‘Most Valuable Player’ at the under-17 World Cup in Chile.

However, a deal for Chukwueze seems all but over, with an agreement in place that will see him officially sign on the 1 July.

In other Arsenal news, Bolton defender is close to signing with the club after a second bid was made. 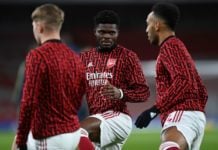