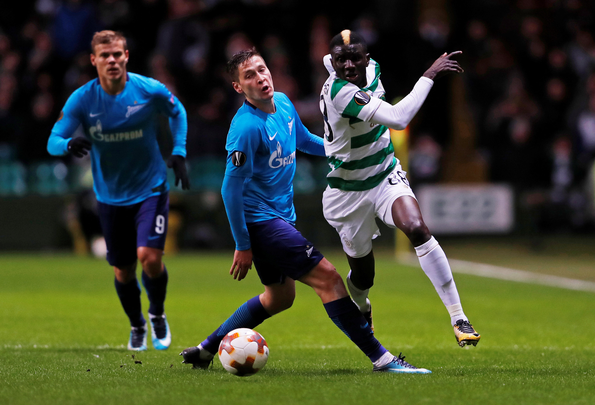 Celtic midfielder Eboue Kouassi has hailed his team-mates and the club’s support following the Bhoys’ 1-0 victory over Zenit in the Europa League last 32.
The 20-year-old Ivorian was a surprise starter against the Russian side, but Brendan Rodgers’ gamble paid off as he dominated the midfield and was one of the best players on the park before eventually being substituted in the 73rd minute.
Ironically, his replacement, Charly Musonda, set up the winning goal five minutes later when his pass found Callum McGregor who hammered the ball home.
“What a night! Good win. Thanks to all the fans for the support,” Kouassi said, as quoted on his personal Instagram account

What a night! Good win🙏🏽. Thanks to all the fans for the support.

The Ivorian ha struggled with injuries and illness since joining the Hoops for £3million from Krasnodar last January, but his recent performances against Partick Thistle and now Zenit showed what kind of player he is.
The Hoops boss will be pleased not only with the performance of Kouassi, but also the much-maligned Jozo Simunovic, who turned in his best performance for months as the Bhoys were solid at the back and match winner Callum McGregor, who was excellent aside from the goal.
It will be interesting to see if Kouassi keeps his place in the Hoops side for Sunday’s match against St Johnstone, or if he is rested with the second leg against Zenit in mind.
In other Celtic news, Chris Sutton could have picked any one of five players to be man of the match v Zenit
Don’t miss out on breaking and exclusive Celtic news by clicking here for our brilliant 24/7 updates on Facebook, Instagram and YouTube.