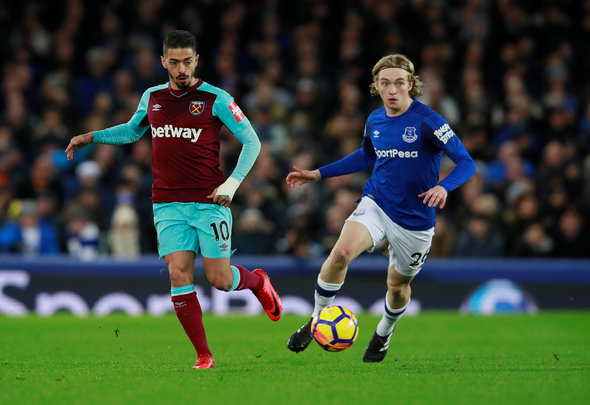 West Ham United have not made a bid for Everton’s highly-rated youngster Tom Davies, according to assistant manager Alan Irvine.
Talking in the Daily Mail Irvine states that despite rumours of an offer being made for the 19-year-old midfielder, there is no truth to those suggestions.
Hammers assistant Alan Irvine admitted that Davies was known to the Irons, and to Irvine in particular, after the two worked together earlier in the Everton star’s career but as far as he was aware there was no offer for the midfielder.
‘I know him well, worked with him since he was 13 or 14 and is a really talented player but to my understanding, we have not made any approach to Everton,’ said Irvine in the Daily Mail.
The Toffees play the Baggies at the weekend and Davies will undoubtedly be raring to get his side back into the mode of scoring goals after their recent drought in front of the net.
Football Insider verdict:
West Ham are renowned for being a club that nurtures talent, whether it comes directly from their setup or further afield, it is what they do. Tom Davies is one of England’s brightest prospects but he is also highly thought of on Merseyside. The youngster and Liverpool native has already made 30 outings in all for the Blues this season and is clearly a player whom the club see as being integral to their future. It is for this reason that there can be no substance to this gossip and Davies will remain in the blues of the Toffees.
In other West Ham transfer news, Moyes eyes title winner as January exit emerges of another star.
We’ve launched a << BREAKING NEWS FEED>> exclusively for your club. ‘Like Us’ on Facebook by clicking here if you want 24/7 updates on all West Ham breaking news.