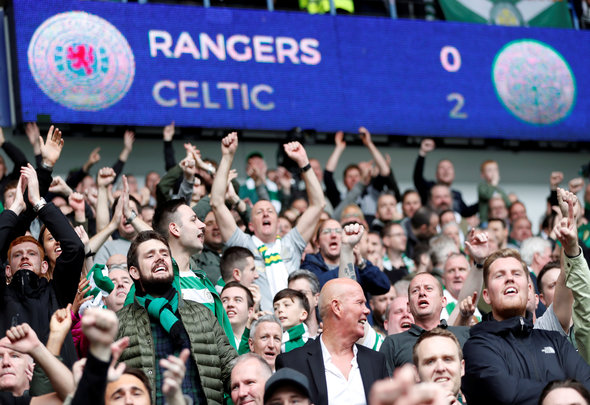 TalkSport presenter Alan Brazil believes the TV viewing figures for the latest Old Firm clash between Celtic and Rangers show nobody in England cares about the Glasgow giants – bluntly claiming “nobody gives a monkey’s”.

245,000 people watched the game – which Celtic won 2-0 – across Sky Sports’ platforms but that was dwarfed by the Sheffield derby, and even failed to draw more viewers than Aston Villa versus Nottingham Forest.

The Old Firm has long been Scottish football’s showpiece game but the ever-dwindling TV figures won’t make good reading for anyone in the Scottish game.

With TV contracts predicated on four Old Firm clashes a season, the fact that bog-standard Championship matches outdraw it – and with the SPFL TV deal coming up for renewal soon – clubs will be worried about a potential drop in revenue from broadcasters.

“I was stunned by the TV viewing figures for this season’s first Old Firm clash,” Brazil wrote in his column for the Sunday Post.

He added: “We can say all we like in Scotland about how big a fixture the Old Firm clash is – and boy do we like to talk about it!

“But the figures don’t lie. Fewer people than ever south of the border feel the same way.

“Craig Bellamy got pelters before the Ibrox game for saying nobody in England cares about Celtic’s success.

“We laughed at the time – but he had a point after all.

“I split my time between Suffolk and London and the people I socialise with ask about Scottish football because I talk about it all the time.

“But beyond my immediate group, nobody gives a monkey’s.

“Neither Celtic nor Rangers get a look in down here.”

Despite still being a hot ticket in Glasgow – Old Firm tickets can still be as rare as hen’s teeth – it appears TV viewers are switching off in their droves.

With Scottish football languishing further and further behind their English counterparts thanks to the huge gulf between the respective TV deals, the people who run Scottish football need to do something to reverse the trend of falling viewing figures before the game north of the border sinks to depths previously thought unimaginable.

The next Old Firm clash takes place on December 30 and will be a guaranteed sell out but there will now be more than a few nervous directors waiting on the latest viewing figures filtering through.