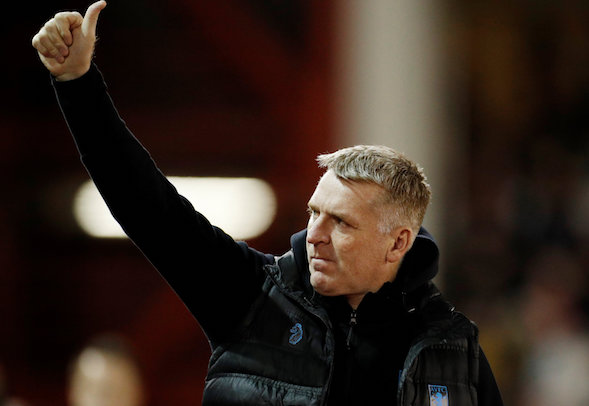 Aston Villa defenders Neil Taylor and Ahmed Elmohamady are facing the axe under Dean Smith with Matt Targett and Frederic Guilbert waiting in the wings, according to Darren Bent.

The former Aston Villa and England striker, speaking exclusively to Football Insider, says that the club’s first two results in the Premier League, both ending in defeat, means that changes are likely and that the full-backs are under threat.

Smith was finally able to welcome right-back Guilbert to Villa Park this summer after initially signing him back in the winter transfer window, while he also secured the capture of left-back Targett from Premier League rivals Southampton.

Neither have played a minute in the Premier League this season but Bent thinks that Elmohamady and Taylor are both facing a losing fight in the starting XI.

Asked if he thought the full-backs were under threat by those waiting in the wings, Bent told Football Insider: “Yeah, I think so because of how the results have been. They’ve lost the first two.

“They’d have looked at the first game and thought: ‘Yeah, we’ll try take it to Spurs,’ but the game against Bournemouth would have been one they would have thought they could have got something from.

“I think it’s not going to be too long, I can’t see it being too long before one of those guys are in.”

Both Taylor and Elmohamedy played a crucial role in helping Villa secure promotion to the Premier League last season, Smith managing his side to play-off glory a year after the club’s defeat to Fulham.

Guilbert was signed from and then sent back to French outfit SM Caen back in January, while Targett arrived at Villa Park with 43 Premier League appearances under his belt, 16 of those coming last season.

In other Aston Villa news, Football Insider can reveal that the club are in talks over agreeing a deal with a promising attacker.