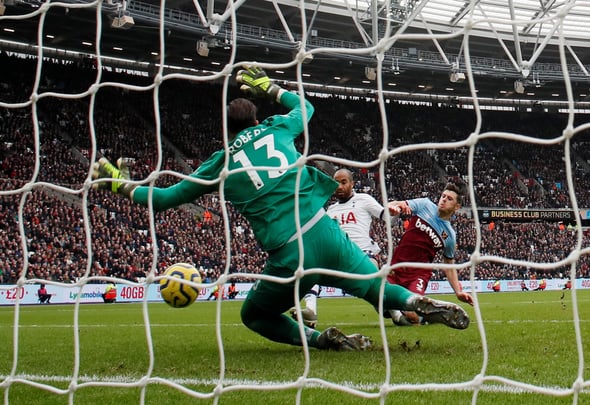 Paul Robinson has ripped into West Ham goalkeeper Roberto and says that the Irons are in “all kinds of trouble” after their dire winless run continued against Tottenham.

The former Spurs and England star, speaking exclusively to Football Insider assistant editor Russell Edge, says that the Spanish shot-stopper is simply “not good enough” to play between the sticks for Manuel Pellegrini and that his form is a real issue for the manager.

Roberto, who has been a mainstay in the side since Lukasz Fabianski’s injury, saw Jose Mourinho’s men hit three past him on Saturday afternoon, a late fightback not enough to stop the Irons slipping to a 3-2 defeat.

Having seen the Hammers keeper concede two goals in all but one of the club’s last seven games, Robinson has blasted his performances and says he is a reason why the club are on a seven-game winless run.

Robinson told Football Insider: “They’re in all kinds of trouble at the minute West Ham, they have been very, very poor.

“They’ve got a real problem in goal, the goalkeeper’s not good enough. He’s missing players through injuries. It’s ironic the last time that West Ham’s last win came against Jose’s former side in Manchester United.”

Roberto, who joined the Hammers over the summer and started the season as backup to Fabianski, has played nine times during his time in east London, seven of those games coming in the Premier League.

The Irons’ next match sees them take on another London side in Chelsea next weekend.

In other West Ham news, Danny Mills has made a “huge” claim about the Hammers board after the defeat to Spurs.