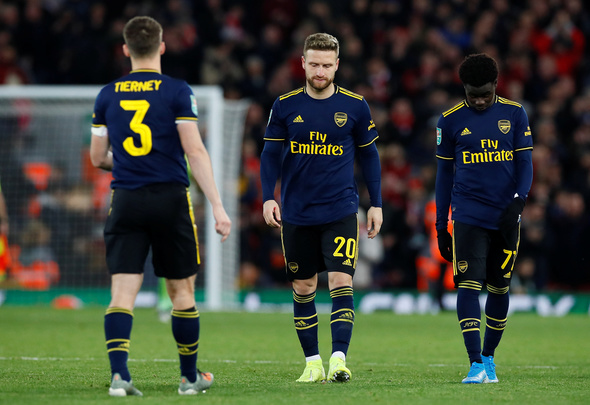 Paul Robinson has ripped into Arsenal defender Shkodran Mustafi after the centre-back’s performance against Liverpool in the League Cup.

The former Tottenham and England goalkeeper, speaking exclusively to Football Insider assistant editor Russell Edge, says that the 27-year-old had a chance to stake a claim for more regular football under Unai Emery but that he failed to take his chance on Wednesday night.

Mustafi, who has not played a single minute of Premier League football for the Gunners this season, opened the scoring at the wrong end of the pitch at Anfield on the way to a 5-5 draw, deflecting the ball into his own net after just six minutes.

Robinson says that with a leaky backline in north London, Wednesday’s clash was the ideal opportunity for the German international to make a mark on the side but that he failed to take that huge chance.

Robinson told Football Insider: “The Arsenal defence is notoriously not great, we know about how porous they can be. Mustafi, I don’t think he covered himself in glory in what was a rare start for him.

“It was an opportunity to force his way into a porous Arsenal defence and I thought he was poor last night. I don’t think his decision making was good, defensively he was weak.”

Mustafi’s only appearances this season have come in the cups, starting their two League Cup and three Europa League games while being left out of their Premier League matchdays completely.

He has a total of 120 matches under his belt for the Gunners, finding the back of the net on eight occasions.

In other Arsenal news, Darren Bent has suggested that the Gunners could pull off a shock bargain for a Tottenham star in 2020.