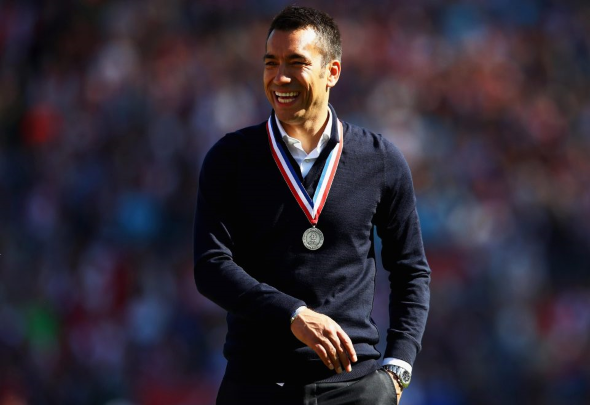 Former Rangers star Giovanni van Bronckhorst has been made second-favourite to take over at Ibrox following Pedro Caixinha’s sacking – and it’s exactly the kind of appointment that will delight fans.

On Wednesday, SkyBet named van Bronckhorst second in the running to Derek McInnes, pushing Graeme Murty down to third-favourite.

The 107-times capped Dutch international enjoys a growing reputation as a coach after guiding Feyenoord to their first Dutch title since 1999 in his second season in charge.

Van Bronckhorst also led the side to a Dutch Cup win the season before after replacing Fred Rutten in 2015.

Some of the candidates mentioned for the job have been less-than-inspiring (Billy Davies, Alex McLeish) and others (Steve McLaren) have seen fans insist they won’t return to Ibrox if they were appointed.

McInnes is still the favourite with the bookies to replace Caixinha but the introduction of someone like van Bronckhorst will get fans a lot more excited than they’ve been so far – to the point they’re dancing in the streets of Glasgow.

The former Arsenal, Barcelona and Feynoord player ticks almost every box the Rangers board will have when they make their move.

He’s worked in British football and is one of only a handful of players to have won the Scottish Premiership and English Premier League.

He’s also lifted a European Cup and was an integral part of the Barcelona squad as they moved from being a top-level side to being one of the best sides in history.

Van Bronckhorst is also a fairly experienced coach – if not manager – with a four-year managerial apprenticeship served under Rutten and Ronald Koeman at Feyenoord.

There’s still a risk involved in appointing a young manager who has had success in his first manager’s job – just look at another Dutch ex-Rangers player in Frank de Boer – but it’s definitely a step up in calibre of candidate.