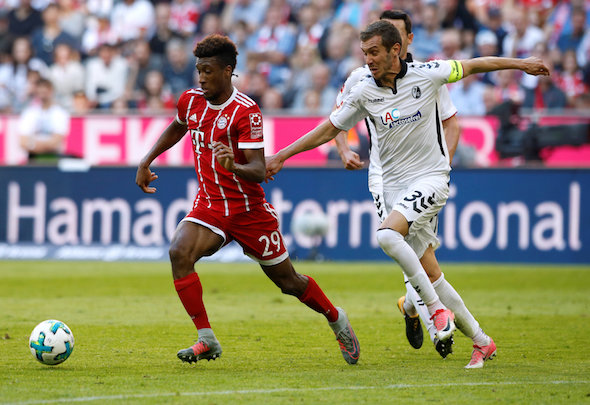 The 20-year-old notched up his second league goal for his new club in the 1-0 victory over Dundee on Saturday afternoon at Celtic Park.

Ntcham’s winner meant that the Hoops extended their unbeaten run in domestic competition to 59 matches.

The youngster has impressed during his debut campaign in Scotland, contributing with a total of three goals and two assists in all competitions from central midfield.

Speaking to the Scottish Sun, the Frenchman made it clear that his fellow countryman Coman is the man that Celtic need to stop at the Allianz Arena in midweek.

“Bayern have some top French players,” he said.

“Franck Ribery is there and Corentin Tolisso, the midfielder, as well as Kingsley.

“On the pitch, of course he’s a player we need to watch because he’s very talented.

“He’s very fast and very strong when he has the ball at his feet.

“We will have to be careful against him.”

Coman found himself on the scoresheet for the first time in the Bundesliga this season as Bayern strolled to a 5-0 victory over Freiburg on the weekend.

With veteran winger Franck Ribery is out of action due to injury, Coman is likely to start against the Hoops as he looks to complete his first 90 minutes in the Champions League this season.

The Frenchman has featured in every single match for the European giants in the early stages of the campaign, contributing with two goals and two assists in all competitions.

In other Celtic news, the club are joint favourites to sign a left-footed midfield creator who has demolished the Hoops in the past.