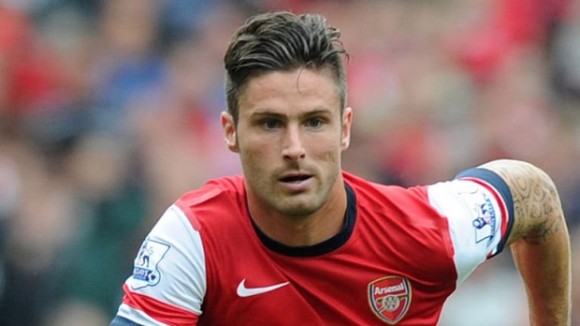 By Michael Cantillon
Olivier Giroud has admitted Theo Walcott deserves to be in the Arsenal team but has vowed to regain his place from his centre-forward rival.
Giroud lost his position as the spearhead of the Gunners attack to Walcott shortly before the international break.
Speaking from the France team camp, Giroud expressed frustration at his lack of game time recently but said he understood the decision.
“It has been for several matches now that I have played less, that is for sure, but I do not need to be worried,” said Giroud. “I need a bit more game time but also to believe more in my abilities.
“At Arsenal, I am in competition with Theo for the striker position, but he is doing well at the moment so there is no reason to change.
Since Giroud was axed in favour of Walcott, Arsenal have picked up victories at Leicester and at home to Manchester United in the Premier League, but also lost at home to Olympiakos in the Champions League.


Giroud spoke of the unfamiliarity of this type of situation for him but says he can use it as motivation to regain his place.
The France international observed: “Whether it was at Tours, Montpellier or Arsenal, I have never experienced a situation like this. I have often played from the start. It is something new for me.
“I was in his [Walcott’s] place in previous seasons at Arsenal. I imagine what he must have been thinking. But I feel that the coach believes in me. I need to take positives and to harden myself mentally.”