The re-signing of Southampton goalkeeper Fraser Forster would “definitely” give the Celtic dressing room a lift next month.

That is according to Parkhead legend Frank McAvennie, speaking exclusively to Football Insider correspondent Dylan Childs about the prospect of the 32-year-old returning to Glasgow in January.

Football Insider revealed last week the Celtic board are willing to provide the funds to try and lure the Forster to the club on a new loan deal.

However, they face an uphill battle persuading Southampton to let their number two keeper leave halfway through the season.

The six-times England international is yet to make an appearance for the Saints this season with Alex McCarthy the undisputed number one at St. Mary’s.

His replacement Vasilis Barkas has failed to impress since his £4.5million move from AEK Athens and was replaced by the young Conor Hazard for today’s win over Kilmarnock.

When asked by Football Insider if Forster‘s arrival would likely have a big psychological impact on the dressing room, McAvennie said:

“Oh my God, he could lift that dressing room – definitely. They should have kept held of Gordon because he is better than the keepers that are there at the moment.

“The boys would get a great lift if Forster came back. They would also ask him why he did not come in the first place. 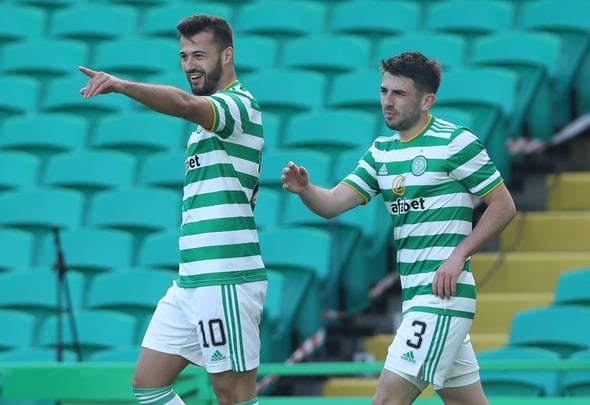 “He is the kind of player you want in a dressing room. If Klimala or Ajeti walks into a changing room it is not going to change anyone’s attitude.

“Too many of the players in that team are too comfortable because they know they are not going to get dropped.”

In other Celtic news, Danny Mills names the two players who can spearhead turnaround.