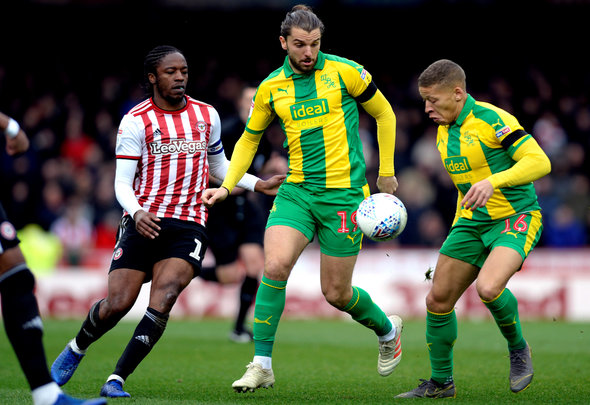 Darren Bent admits he is baffled that Aston Villa did not make a move for West Brom’s new signing Romaine Sawyers.

The former Aston Villa and England striker, speaking exclusively to Football Insider, was left raving over the latest arrival at the Hawthorns but was astonished no Premier League sides looked to pounce for his capture.

The Baggies confirmed on Saturday their capture of the 27-year-old, the midfielder returning to the club which he left six years ago.

Having been in a side on the receiving end of Sawyers’ talents, Bent has revealed his shock that no one from the Premier League has made a move to sign him.

He suggested Aston Villa should have taken him on board, with the midfielder having played 230 times with Dean Smith as his manager.

“It surprised me that no one else came in for him,” Bent told Football Insider.

“For the last few years in the Championship, I thought he’s one of the best players. How have none of these teams that have been promoted managed to steal him from Brentford? I couldn’t understand it.

“I was on the bench a couple of times for Derby, him destroying us and thinking: ‘Why has no one taken a chance on him? West Brom have signed him, it’s not a Premier League side, it’s a Championship side. I thought Aston Villa would have looked at him. Dean Smith probably knows him better than anyone.”

Sawyers was a mainstay for Brentford in the Championship last season, playing 42 times and chipping in with nine assists, although he failed to find the back of the net once.

He has featured over 120 times in both the second and third tiers of English football, having moved to Walsall after his exit from West Brom.

In other Aston Villa news, Danny Mills has claimed the club have got a slight advantage over Newcastle United in the hunt for an 18-goal forward.