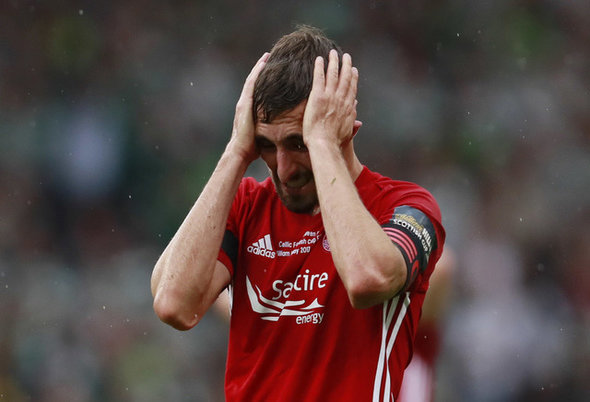 Aberdeen midfielder Graeme Shinnie has revealed his Dons side may target Celtic’s Nir Bitton when the sides meet at Pittodrie.

Bitton has been used as an emergency central defender at times this season after injuries to Jozo Simunovic, Erik Sviatchenko and Dedryck Boyata have forced Brendan Rodgers into shuffling his side regularly.

Bitton has made 10 appearances for the Hoops this season so far – all of them in defence – and has done fairly well in an unfamiliar role.

The Israeli – who normally plays in midfield – is expected to line up alongside Boyata at the heart of Celtic’s defence at Pittodrie and Shinnie revealed the Dons may try and take advantage of that.

“He’s a good player but if he’s playing out of position then, potentially, it could be an opportunity for us,” Shinnie said, as quoted by the Press and Journal.

“We’ve got good attacking players and we know we can score goals so it’s a case of trying to keep a clean sheet and then trying to build on that.

“We’ve had team meetings as we do before every game.

“We try to pick out their weaknesses and see where we can exploit. It’s obviously a wee bit tougher when you’re going up against a team who haven’t lost a game in 60 domestic games, but we have to try and pin-point something we can take advantage of.”

The two sides are currently level on points in the Scottish Premiership – Celtic lead on goal difference – and both will be looking for three points to leave them clear at the top of the table.

Derek McInnes’ side have been the closest challengers to Celtic in recent years and a win for the Dons would be a huge confidence boost as the first round of fixtures in the Scottish Premiership nears completion.

Celtic are on a 60-game unbeaten run in domestic competitions – stretching back to before Rodgers was appointed manager – and will be looking to extend that with a win at Pittodrie.

In other Celtic news, Derek McInnes has issued a stern warning to the Hoops ahead of their clash with Aberdeen on Wednesday.