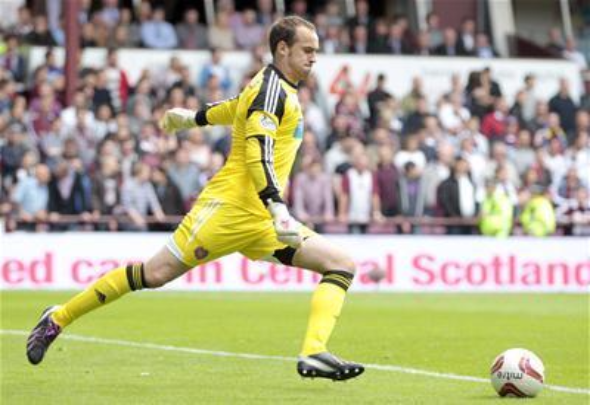 Kilmarnock goalkeeper Jamie MacDonald believes that Rangers don’t have a chance of catching Celtic in the title race, claiming that the Hoops “set the standard in the league.”

The shot stopper played in goal at Ibrox on Saturday as his Killie team suffered a 3-0 defeat against Rangers with goals from Lee Wallace, Andy Halliday and Joe Garner.

The result has seen the Gers occupy second place in the league and sat nine points behind their fierce rivals Celtic, after playing a game more.

MacDonald has stated that Brendan Rodgers’ side are “the best team by far” and has ranked Rangers alongside third-placed Hearts and fourth-placed Aberdeen.

“Celtic set the standard in the league,” said MacDonald to the Scottish Sun.

“They are the best team by far but after that there’s not that much between the rest.

“There is a little group of Hearts, Aberdeen and Rangers but we showed the other night, and against Rangers earlier in the season, that we can take points off them and everybody else.

“It’s a strange league. If we’d won at Ibrox, we would have been very close to Rangers.

“Two weeks ago we were near the bottom and suddenly we could have been well up there.

“The league is close. Everybody is going to beat everybody but it’s just trying to get that bit of consistency.

“There is not a great deal in the league between second place and 12th place.”

Mark Warburton’s team returned to Scotland’s top flight this season after being demoted to the Third Division in 2012 following administration.

Formerly involved in a top of the table clash with Celtic, fans will be keen for Rangers to establish their dominance on Scottish football again.

However, they have already lost to Celtic twice this season, including a humiliating 5-1 defeat in the league and a 1-0 loss in the Scottish League Cup semi-final.

In other Rangers news, Willie Henderson has delivered a damming verdict on Rangers’ title hopes this season.