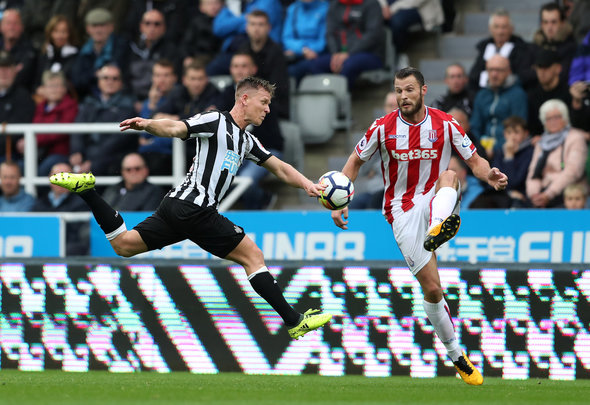 Stoke City star Erik Pieters has said that Newcastle United will hurt a lot of teams from set pieces this season.

The Dutch full-back was helpless as he watched Jamaal Lascelles power home a match winning header for a second week in a row to secure a 2-1 win for the Magpies, following Christian Atsu’s and Xherdan Shaqiri’s strikes.

It was a near replica of the goal he scored against Swansea, as the 23-year-old rose highest to meet the delivery from a Matt Ritchie corner and put it into the back of the net.

However, Pieters reckons that it will be a trend for the North East side to dominate at the likes of corners.

He was quoted by the Shields Gazette as saying: “”We know they’re going to be strong in that area.

“Set-pieces are such a big part of modern football.

“A set-piece was our downfall. We had said to each other we know they come like that

It is the club captain who leads the Magpies’ goal scoring chart thanks to his two back-to-back strikes, while Ritchie has been the man behind the majority of their six goals this season strikes with four assists.

Atsu, Lascelles’ defensive partner Ciaran Clark and summer signing Joselu are the others to have onto the scoresheet this season, with the latter duo having netted in a 3-0 victory over West Ham.

The Magpies will be hoping to replicate their fine form once again when they head to the south coast to take on Brighton on Sunday, where they could secure a fourth straight victory.

In other Newcastle United news, Ritchie has made an honest admission about the club’s off-field events.