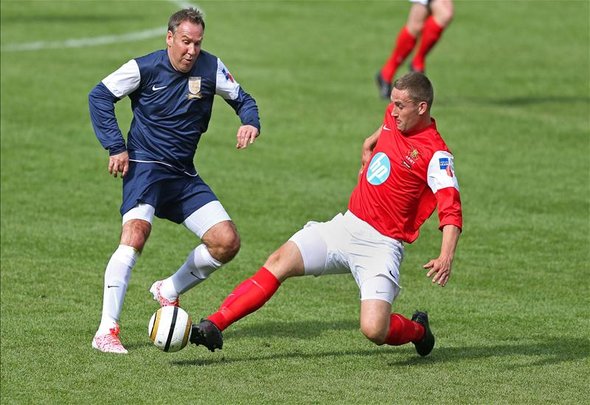 Paul Merson has claimed that Arsenal will find it difficult to handle Stoke’s attacking players on Saturday.

Merson has highlighted the dangerous pair of Marko Arnautovic and Xherdan Shaqiri, who have helped Stoke to win five of their last seven matches.

The Gunners host Stoke at the Emirates in the Premier League and could end the weekend on top of the table if results go their way.

Arsene Wenger’s side are currently second-placed and three points behind leaders Chelsea, who host West Brom on Sunday.

Ex-Arsenal forward Merson believes his former side will win 2-1 against Stoke, but are going to face a big challenge from Mark Hughes’ side.

“Stoke will cause problems at the Emirates because they have the right players in the right creative areas,” Merson wrote on Sky Sports. “If the Gunners get into an end-to-end battle, Stoke will enjoy that, especially the likes of Marko Arnautovic and Xherdan Shaqiri. I still expect the hosts to win, but it won’t be a walk in the park.”

Stoke have improved drastically since a poor start to the season and are now up to ninth in the table, with their senior players stepping up.

Shaqiri and Arnautovic are two of the more creative players in the side, but Arsenal’s defence will be hoping to keep them quiet.

The Gunners are now regarded as serious title contenders and their striker Alexis Sanchez has been in sensational form this season, scoring 13 goals in 20 appearances this season.

However, Arsenal have not been as impressive defensively and have conceded at least once in each of their last nine games across all competitions.

Goalkeeper Petr Cech will be desperate to end that run against Stoke and keep their title pursuit in full flow.

In other Arsenal news, the club’s supporters reacted on Twitter to Welsher’s player of the month award.