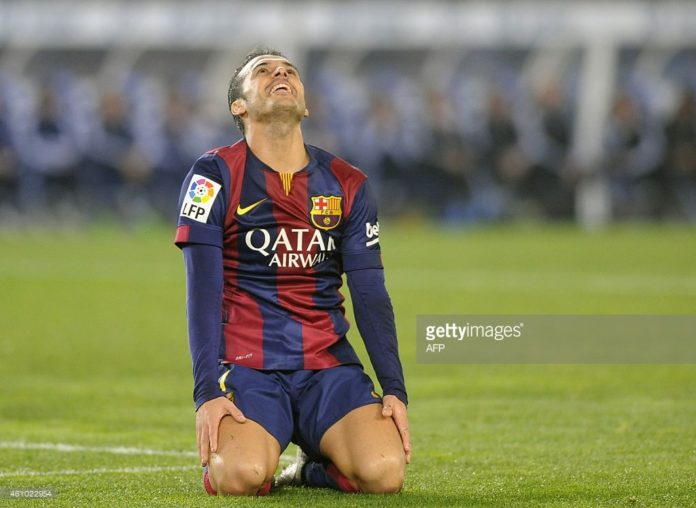 EXCLUSIVE | By Editor
Pedro has agreed a sensational £72million Manchester United deal that will make him one of the top earners at the club, Football Insider sources understand.

United and Pedro’s representatives have finalised the terms of a five-year contract with a basic salary of £190,000-a-week plus top-up bonuses.
On top of the £22million transfer fee, the total package required to entice the Spain international to Old Trafford is £72million, although he will bank more money if he and the team are successful.
This will instantly make Pedro one of the best-paid players at Old Trafford, although he will be behind top earners Wayne Rooney, who is on £250,000-a-week, and Bastian Schweinsteiger.
It is the latest in a series of big-money deals negotiated by United as manager Louis van Gaal builds a squad to challenge for the Premier League title.
Speaking on Tuesday night after scoring the goal that sealed Barcelona’s 5-4 Super Cup win over Sevilla, Pedro all but confirmed that he is leaving Barcelona. “He said: “It’s a difficult situation for me. I don’t want to go but it’s a question of playing time, of continuity in the team, it’s been this way for a few years now.
“This is not about money. It’s a lack of respect towards me to say that it is. It’s about me playing. I’m ambitious. I don’t know what will happen but if I go I will always be a Barca fan.”
Executive vice-chairman Ed Woodward led the talks which clinched the signing after United agreed to meet Pedro’s £22million release clause last week.
The club have acted quickly to replace Angel Di Maria, who has joined Paris Saint-Germain for an initial £45million.
Barcelona are powerless to stop Pedro ending his long association with the club due to the buy-out clause inserted in the new contract he signed earlier this summer. He signed a four-year contract at Camp Nou in June, but it is understood that the player only committed to the new deal after negotiating a reduction in his buy-out clause from £110million to £22million.

The Spain international has made it clear to friends that he wants to join United and link up with his countrymen Juan Mata, David de Gea and Ander Herrera.
Louis van Gaal, who has spent £76million on five new signings so far this summer, has admitted he wants to “improve at least two positions” before the transfer window closes, with the Dutchman identifying a forward and an experienced centre-half as his two priority areas of reinforcement. United are also considering a move for Arsenal target Karim Benzema.
Despite making a consistent contribution to Barcelona’s treble success last season, Pedro’s opportunities have been limited by the presence of Lionel Messi, Neymar and Luis Suarez.
The Barcelona academy graduate, who can play in all three forward positions, has scored 98 goals in 318 appearances for the Catalan club as well as an impressive 16 in 50 international matches.