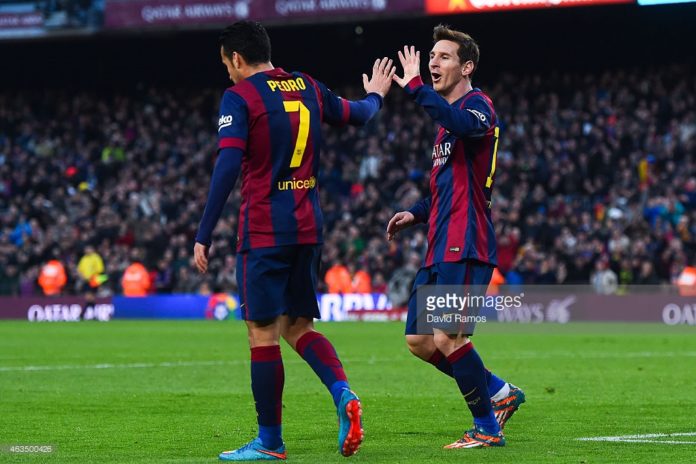 By Spain correspondent Miguel de Souza
Pedro could be tried out in defence by Barcelona next season after agreeing to extend his contract with the club, Football Insider sources understand.

With Dani Alves expected to leave the Catalan giants after Saturday’s Champions League final, Barca will need to rejig their defence next season.
As revealed by Football Insider, one surprise solution that has been discussed internally is to trial Pedro at right-back.
Barcelona believe Pedro has the attributes to take over the offensive right-sided role in which Alves has been such a huge success since joining from Sevilla eight years ago.
The Champions League finalists announced on Thursday that the Spain international has agreed a new, four-year contract to replace his existing deal, which was due to expire in a year’s time.
By contrast, Alves is likely to play his final Barcelona match on Saturday after failing to reach agreement with the club on an extension and publicly criticising their efforts to keep him. The 32-year-old is a target of Paris Saint-Germain and Manchester United.

The future of Pedro had been doubt as he has slipped down the pecking order at Camp Nou in the last two seasons but he has been given assurances that he remains a key squad player.
The Academy graduate has a highly creditable record of 16 goals in 25 starts this season but has been used almost predominantly as a substitute in the key matches, when manager Luis Enrique favours the holy trinity of Lionel Messi, Luis Suarez and Neymar.