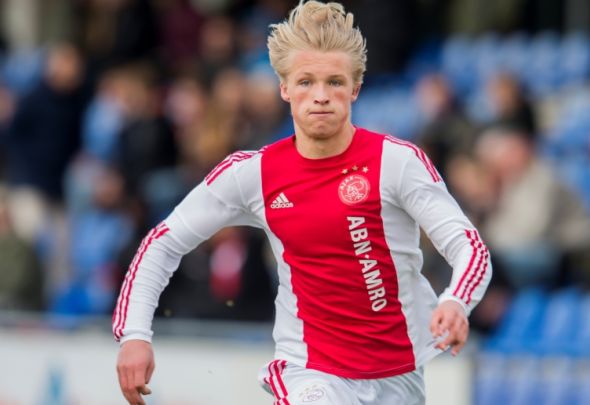 The 19-year-old forward has been in sensational form for Ajax this season after breaking into the side during pre-season.

A one-time Denmark international already, Dolberg struck his 20th goal of the season in the Europa League semi-final on Wednesday evening as Ajax smashed Lyon 4-1 in Holland.

As his stock continues to rise as one of the best up-and-coming talents in European football right now, Dolberg has been repeatedly linked with numerous Premier League clubs.

But Tottenham fans urged Pochettino to steal a march on their rivals to bring Dolberg to White Hart Lane in the summer to provide competition to star striker Harry Kane.

Get dolberg signed up #THFC #COYS

I think Poch and @SpursOfficial should be looking at signing a few of these @AFCAjax youngsters in the summer. Especially Dolberg #Talents ⚽

As well as scoring 20 goals in his 44 league and cup encounters for Ajax this season, Dolberg has also provided eight assists as Ajax look to complete a Europa League and Eredivisie double.

In other Tottenham transfer news, this 25-year-old has responded to reported interest in him from Spurs.