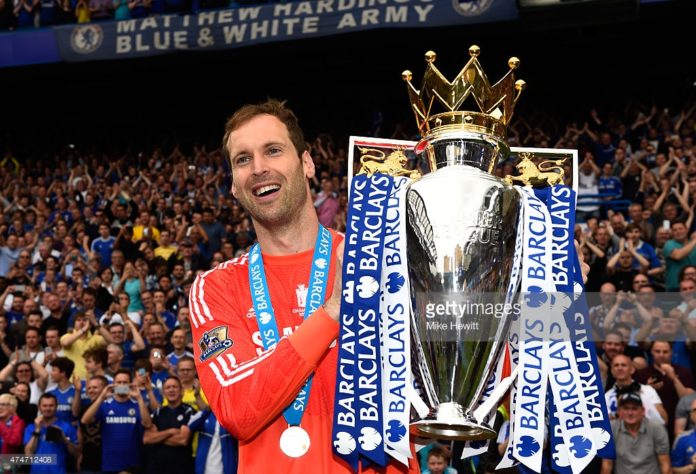 By Arsenal correspondent Tony Hughes
Petr Cech is set to finalise a transfer to Arsenal by the end of next week, Football Insider sources understand.

Barring any late hitches to the deal, Cech is poised to become Arsenal’s first signing of the summer in a deal worth £11million.
Sources close to the situation told Football Insider that the move was ’99 per cent done”, with the only hurdle said to be Jose Mourinho, who is not trusted by senior officials at Emirates Stadium.
However, all parties are confident the transfer will not be blocked and that Cech will soon be a Gunners player after the goalkeeper informed Chelsea at a meeting on Monday of his intention to make the short move across London this summer.
Arsenal are set to finalise the formalities by tabling a formal £11million bid for Cech, which is the fee agreed by the two clubs. It is understood that a deal could be completed within a week.
As revealed by Football Insider last month, the FA Cup holders have already agreed personal terms with the 33-year-old after being given permission by Chelsea to hold talks with the player.
The Czech international has also taken the step of reserving London school places for his children in a clear sign that he expects to push through a move to Arsenal.

Cech’s camp are confident that the final hurdle to a deal has been cleared and Chelsea will not now stand in the goalkeeper’s way out of respect for his considerable achievements during his 11 years at Stamford Bridge, in which he has won every major honour.
View image | gettyimages.com

There have been reports, based on comments from Jose Mourinho, that the west Londoners have demanded an Arsenal player in exchange for Cech but Arsene Wenger will not allow any of his first-teamers to be part of the deal.
Football Insider understands that Arsenal and Cech’s representatives have agreed the terms of a three-year contract worth more than £100,000-a-week.
Cech has 12 months remaining on his contract but spent most of last season on the sidelines after losing his No1 status to Thibaut Courtois.
Arsene Wenger is keen to pull off one of the headline signings of the summer amid both doubts over the future of Wojciech Szczesny and current first choice David Ospina’s long-term ability to be the No1.