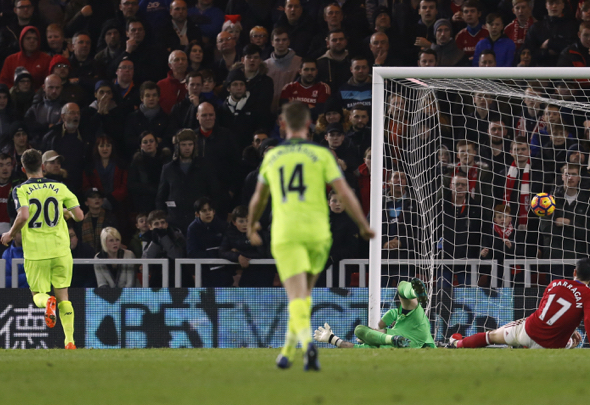 Phil Neville has hailed Liverpool ace Adam Lallana for taking up “intelligent positions” during his sides 1-1 draw with Manchester United at Old Trafford on Sunday afternoon.

Jurgen Klopp’s side picked up a point as James Milner’s first-half penalty was cancelled out by Zlatan Ibrahimovic’s late header in the second half.

United manager Jose Mourinho substituted midfielder Michael Carrick at half-time after the opposition midfield had got the better of him and his teammates.

As a result, captain Wayne Rooney was brought on as his replacement as the home team produced a better display.

After the game, BBC Sports pundit Neville had this to say about the Reds performance as he also hailed Klopp.

“I thought in the first half, tactically, I thought Jurgen Klopp got it really right,” Neville told Match of the Day’s Facebook page. “He played without a centre-forward, he split Firmino and Origi to play inside right, inside left and Lallana just picked up Michael Carrick.

“Every time Manchester United got the ball in the middle of that midfield there was four, five men around them.

“When they won the ball, Lallana took up some really intelligent positions either side of Michael Carrick. I think that is why Jose Mourinho changed formations at half-time and subbed Carrick.”

He last scored for his side during their 4-1 home win against Stoke in December as he will be looking to add to his tally against league strugglers Swansea next Saturday.

After that draw, Klopp’s side remain five points ahead of their north-west rivals in the Premier League table but they are now seven points behind leaders Chelsea.

Lallana will be hoping to help his side progress through to the next round of the FA Cup on Wednesday when they travel to Plymouth for their third round replay.

In other Liverpool news, Gary Neville has delivered his verdict on the Reds title chances.