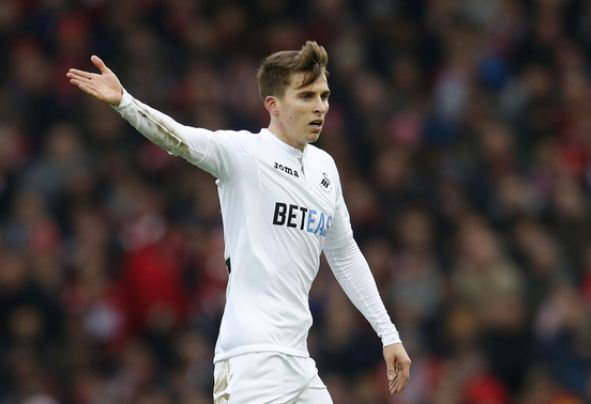 Tom Carroll’s performance for Swansea against Liverpool on Saturday has proved that Mauricio Pochettino has made his biggest mistake since joining Tottenham.

The 24-year-old midfielder turned heads as he orchestrated a historic 3-2 win against Liverpool.

Carroll hit the ground running at Anfield when he delivered a beautiful cross to provide Fernando Llorente with Swansea’s second goal of the game – but his brilliance didn’t stop there.

With a reported 85% pass accuracy in the game and 100% of his crosses and long balls finding the desired destination, the former England Under-21 international proved that he could have easily coped with the style of play Pochettino demands from his team.

He didn’t look like a player who hadn’t played in the Premier league since August, and had only made three appearances for Tottenham all season. He looked fit, sharp and extremely comfortable on the ball.

It’s well known that the Europa League can hurt teams in their following Premier League matches, and with Spurs competing on several different fronts this season, Pochettino will need all the manpower he could get.

Injuries to key central midfielders could see his squad thin dangerously, especially now that Eric Dier seems to be flourishing playing in a much more defensive role than he was used to last season.

February sees Spurs play five games in 23 days, with a potential sixth game if they progress in the FA Cup – a peak time for players to pick up injuries or suspensions, especially as that run includes two games in Europe and an away clash against Liverpool.

The sale of Carroll brings the Danny Welbeck deal to mind when he moved from Manchester United to Arsenal – a young English lad, who has spent the majority of his life at the club he supports, knows the identity of the club and has real quality and potential to offer to the first team.

If he continues to put in shifts for Swansea like he did at the weekend, his transfer fee (£4.5million rising to £9million with add-ons) is going to seem like one of the steals of the season. You’ve only got to look at some of the other deals involving young British players to see that Swansea have got an absolute bargain.

For his age he has bags of experience, whether on loan in the Premier League or Championship, or international caps with the Young Lions. He’s a young player with a cool head and an exquisite understanding of the game, which is something that’s hard to find in the modern game.

Pochettino hasn’t done a lot wrong since he came to Tottenham, but this is one bit of business he might already be regretting.

In other Tottenham news, this emerging star has been pictured training with the first team in Barcelona.