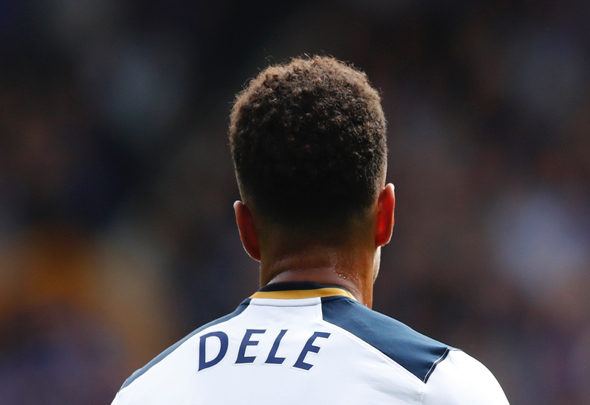 Dele Alli will be out for “a few weeks” with a knee injury, according to Mauricio Pochettino.

The Tottenham playmaker was a notable omission from the Spurs starting XI for the lunchtime north London derby clash against Arsenal.

Alli, 20, was left out of the squad for the Premier League clash, and the injury means he will also miss England’s forthcoming World Cup qualifier against Scotland and the friendly with Spain.

“He twisted his knee in a clash with a team-mate yesterday in the training session,” Pochettino said on Sunday morning, as quoted by the official Tottenham Twitter account. “He’ll be out for a few weeks. We hope it is not a big issue, it’s bad luck, he’s an important player for us.”

Mauricio on @Dele_Alli: “Bad luck yesterday in the training session, he twisted his knee. We need to assess him today and tomorrow.” pic.twitter.com/T8dj0Zg3ru

“He’ll be out for a few weeks. We hope it’s not a big issue. It’s bad luck he was in the team he’s an important player but that’s football.” pic.twitter.com/pXIGmqV98y

The loss of Alli is a major blow for Spurs, as the 20-year-old is one of the team’s most inventive players as well as being a regular source of goals.

However, Harry Kane and Mousa Dembele have been named in the Tottenham starting XI to face Arsenal, while Kevin Wimmer is recalled to the defence, where he will partner Jan Vertonghen and possibly Eric Dier as well in a three-man backline.

Kane, 23, has been out for seven weeks with an ankle injury but he was ruled fit by Pochettino and returns to the team for the north London derby.

Dembele also trained fully on Saturday and convinced the manager that he is able to start the landmark clash at in-form Arsenal.

The Belgium international, who lasted only 30 minutes of the midweek 1-0 defeat to Bayer Leverkusen, is partners Victor Wanyama in central midfield.

With Spurs struggling to score goals in recent weeks, the likelihood is that Pochettino will give Kane around an hour to lead the line even though he has been absent for 10 matches.

Pochettino has been relying on Vincent Janssen and Heung-Min Son up front, but on Sunday he will have his main striker back.

The Spurs manager confirmed on Friday afternoon that he will be without four senior key players, with Toby Alderweireld, Ben Davies, Erik Lamela ruled out through injury and Moussa Sissoko suspended.

Tottenham are unbeaten in their 10 Premier League matches this season but they have failed to record a victory in any of their last six games in all competitions.

In other Tottenham team news, this is the expected starting XI against Arsenal.