West Brom will make a second bid to sign Charlie Taylor from Leeds in the January transfer window, according to a report.

The Telegraph claim Tony Pulis’ side will offer around £4million for the left-back when the window reopens in the new year.

Taylor has already rejected a new contract offer from Leeds as he looks to progress his career beyond the Championship, and will be available on a free transfer at the end of the season.

It is reported that a senior recruitment member from West Brom was sent to watch Taylor’s performance for Leeds in their 1-0 win over Wolves on Saturday.

West Brom were one of two Premier League clubs to show their interest in the 23 year-old during the summer, with Sean Dyche also failing to convince Leeds to let the defender join Burnley.

However, Pulis is set to reignite his interest and attempt to persuade Leeds owner Massimo Cellino into a deal after the West Brom manager was given the go ahead to make new signings.

Taylor is a mainstay of the Leeds team and has played the full 90 minutes of all 14 of their Championship matches this season.

Albion have been looking for a new left-back for some time now, with right-sided defender Allan Nyom filling the void temporarily.

Pulis was involved in talks with West Brom owner Guochuan Lai and chairman John Williams last week to discuss their plans to secure the left-back in January.

In other Leeds transfer news, this out-of-favour star could be given a lifeline against Norwich. 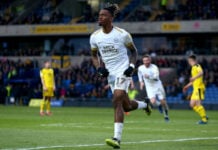