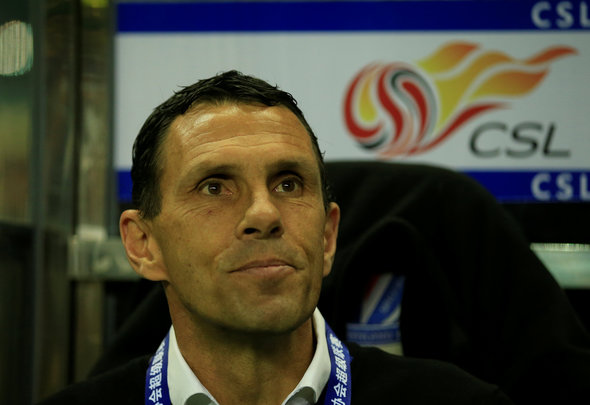 Premier League legend Gus Poyet has confirmed that he would be interested in taking over at Rangers following Pedro Caixinha’s sacking.

The 49-year-old Uruguayan is out of work after leaving Chinese Super League side Shanghai Shenhua.

Poyet made his name in England after joining Chelsea in 1997.

The midfielder spent four years at Stamford Bridge, making 145 appearances and scoring 49 goals, before swapping Chelsea for Tottenham in 2001.

Poyet confirmed that he would be interested in the manager’s job at Ibrox but revealed he has had no contact from the Ibrox giants yet.

“I would [be interested in the Rangers job],” Poyet said, as quoted by the Daily Star.

“Nobody has called me and nobody has said anything but it is one of the jobs I would be interested in.”

Poyet moved into management with Brighton and Hove Albion in 2009 after spells on the coaching staff with Swindon, Leeds and Tottenham.

A League One title in his first season saw Poyet consolidated Brighton’s Championship place before pushing for promotion to the Premier League.

After losing to Crystal Palace in the play-offs, Poyet was controversially sacked by Brighton as he took part in the BBC’s live coverage of the Confederations Cup clash between Spain and Nigeria.

The Uruguyan then headed for Sunderland and managed to avoid relegation with a game to spare in his first season on Wearside before being sacked the following season with the Black Cats perilously close to the drop zone.

Short stints with AEK Athens, Real Betis and Shanghai Shenhua followed with Poyet not lasting particularly long in any of them.

Football Insider verdict: It seems we’ve reached a point where it comes down to the usual managers start throwing their name into the hat out of desperation or a need to keep their name in the papers. Poyet would be an awful appointment. Every job he’s had follows the same rough pattern, Does well first season before everything starts going to hell in a handbasket after that. With no experience of Scottish football and a uninspiring employment history, Rangers fans will be hoping the Ibrox board pass on Poyet.