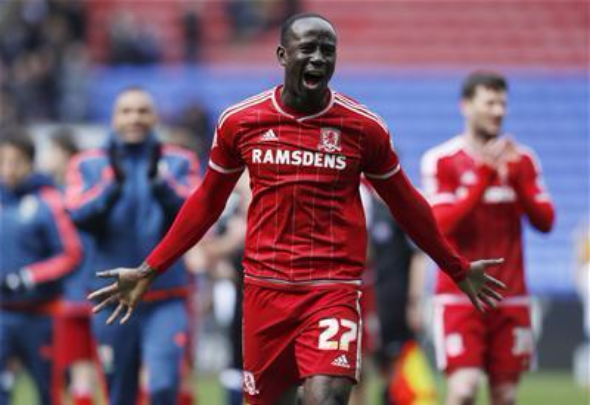 Middlesbrough winger Albert Adomah has rejected a move to Aston Villa, according to a report.

News website HITC claims that the 28-year-old winger has turned down the advances of the Midlands outfit.

This report follows claims from Ed Aarons, the Guardian’s deputy sports news editor, who claimed on his personal Twitter account that Adomah would decide on a move to Villa Park over the weekend.

Adomah to decide whether to join Villa over the weekend. Player has rejected Boro's new contract offer #avfc

It is understood that the Ghana international rejected a new three-year deal at Boro last week because the offer was below expectations.

However, the report claims that the former Bristol City star is more than happy with life at the Riverside Stadium and is ready to battle for an improved offer after deciding against making a move to the Championship with Aston Villa.

It is claimed that Aston Villa and Boro had not agreed terms on the deal before Adomah decided against the move.

The right-winger has entered the final year of his current deal and has slipped down the pecking order at the Premier League club.

The London-born attacker started Middlesbrough’s season opener against Stoke, but was reduced to a 59th minute substitute appearance in their second match against Sunderland before being left out of the match day squad against West Brom on Sunday.

In other Aston Villa transfer news, Lazio manager Filippo Inzaghi has confirmed that Ravel Morrison is on the transfer list.