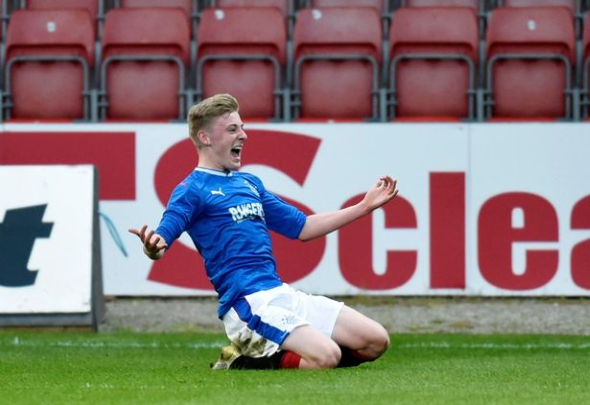 Rangers Academy youngster Matty Shiels has been caught in the middle of an international tug-of-war after being named in both the Scotland and Ireland Under-19 squads.
Shiels was named in the Irish squad to face Romania in a double header before later being picked for the Scottish pool to take on Denmark and Austria.
The Gers youngster represented Ireland’s Under-18 squad last year and tweeted he was “happy to be in the squad” after being named in Tom Mohan’s Under-19 group.

Four hours later, Shield was also picked to be part of Donald Park’s Scotland side and the 17-year-old couldn’t hide his amusement at the situation, tweeting two grinning emojis alongside the squad list.

The youngster has been playing at left-back for the Gers’ Under-20’s but has also regularly played at different age levels as an attacker leading to him being named in differing positions by each national side with the Scots listing him as a defender and the Irish naming him as an attacker.
Shiels was born in in Scotland but is eligible for Ireland thanks to his Donegal-born grandparents.
The Gers youngster isn’t the first player to be embroiled in a battle between Scotland and Republic of Ireland with Aiden McGeady and James McCarthy two high-profile players who picked the Irish over Scotland despite being born in Scotland.
In other Rangers news, it can be revealed that a key first teamer has sensationally asked to leave after the board failed to stick to their promise of giving him a new deal during the transfer window.
Don’t miss out on breaking and exclusive Rangers news by clicking here for our brilliant 24/7 updates on Facebook, Instagram and YouTube.